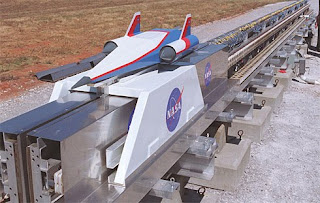 Back in the pioneering days of rocketry, spacecraft were fired from the ground straight up into the heavens. It was and still is an expensive way to launch rockets, fraught with technical risks.

But engineers are working to change that using bold new launch technologies that promise a safer way to boost payloads into orbit and beyond. Now on the drawing boards are space vehicles that combine railgun, scram jet and kinetic launching technologies into an innovative, reusable space launch system.

Initial concepts reveal a wedge-shaped aircraft with scramjets that can be launched horizontally on an electrified track or gas-powered sled. The aircraft would achieve Mach 10 (about 7,500 MPH) using scramjets and wings to reach the upper atmosphere. A small payload canister would then take over (much like a conventional rocket's second stage) to propel the aircraft into orbit. The return trip would be similar to the Space Shuttle, landing safely on a runway next to the launch site.

Engineers insist the technologies for accelerating a vehicle on a horizontal plane already exist. The individual technology components have already been developed or studied, and the goal now is simply to "bring them up to speed." A 10-year program is scheduled to begin with drone launches, culminating in small satellite payloads. Engineers are already talking about manned payloads if the unmanned launches prove successful.

The Space Shuttle is nearly 30 years old and has had its share of tragic accidents. I personally believe it's time we explored better, safer alternatives.

For more information on Engineer jobs, check out: