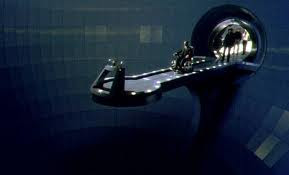 by Alex A. Kecskes
I was blown away by this project. In a scene right out of Star Trek's holodeck, UC Santa Barbara's three-story-high AlloSphere lets scientists walk right into the sights and sounds of their research.
AlloSphere lets you observe electrons spinning from inside an atom. Or you can "fly" through an MRI scan of a patient's brain. You can see the microwave residue from the big bang "painted" across the sphere of the sky, and—after the data are translated for human ears—hear a version of the sounds emitted by the early universe.
Nestled in a 5,760-square-meter space in the California NanoSystems Institute, the AlloSphere is basically a huge, supercomputer-powered digital microscope.
Inside, you'll find over 500 woofers and tweeters suspended in rings just outside two joined hemispheres. High-resolution video projectors display images across the entire inner surface. Together, they deliver 360 degrees of sound and images in a chamber large enough to hold 30 or more researchers.
The AlloSphere unites art and science and goes beyond virtual-reality entertainment to serve as a valuable research tool. The bridge is often crowded with physicists, engineers, computer scientists and artists working on projects for weeks or months at a time. Researchers can interact with their data, which can be streamed live using 3-D glasses, special wireless controllers, and sensors embedded in the bridge's railings.
In another ongoing project, scientists hope to model the time-dependent Schrödinger equation, which describes the electron's changing quantum states. Visualizing electron orbitals in the AlloSphere is much more revealing than ordinary 2-D projections, say scientists who admit that they have yet to fully exploit all of AlloSphere's possibilities.
With its systems continually being enhanced, AlloSphere will soon be operating at levels approaching the limits of human perception—with a visual resolution of 24 million pixels and a full 512-channel sound system.
For an additional perspective, check out this video:
For more information on scientific careers, visit ScienceCareersite.com
Alex A. Kecskes has written hundreds of published articles on health/fitness, "green" issues, TV/film entertainment, restaurant reviews and many other topics. As a former Andy/Belding/One Show ad agency copywriter, he also writes web content, ads, brochures, sales letters, mailers and scripts for national B2B and B2C clients.