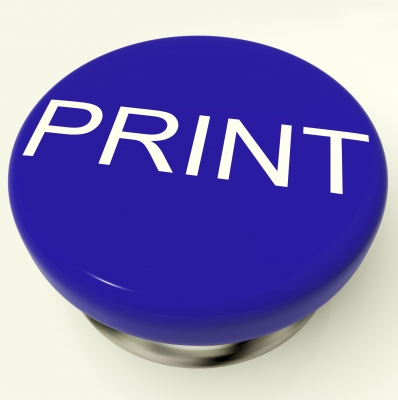 A decade ago, 3D printing technology was the stuff of science fiction; now, however, it has become a reality not only in the lab but also in the production and engineering industries. The product possibilities are endless: almost anything can be made on a 3D printer—as long as you have the right software to create the three-dimensional object you want to produce. Recently, several large companies, including Amazon and Staples, began to make 3D printing devices available to the public.

Stereolithography (SLA), otherwise known as 3D printing, isn't a new concept: in fact, it's been an engineering dream for many decades. The first functional 3D printer, which was invented by 3D Systems' Chuck Hull, appeared in 1984. Since then, 3D printing has expanded to the medical industry, the space program, and the manufacturing industry. Footwear, eyewear, product packaging, household objects, and many other items can now all be produced via a 3D printer.

In 2013, 3D printers traveled outside their familiar production-industry sphere: affordable units like the Cube, a plug-and-play device suitable for consumer use, began to creep into homes across the nation. Staples began selling the Cube 3D printer on its website in May 2013; Amazon followed suit, launching its own 3D printing section the following month.  A range of gadgets, including the Afinia 3D Printer H-Series and the MakerBot Replicator are now available on Amazon.com. The units are affordable, attractive, and compact, making them perfect for residential use.

Opinions about the new technology vary from person to person. After all, 3D printers take creativity to a whole new level: and it's not always benign. In early 2013, reports began circulating of a 3D-printed gun fully capable of firing live rounds. After successful testing, the blueprints were released to the public online. The kicker: the gun was created using a $1,725 Lulzbot A0-101 consumer-quality 3D printing device.

The concept is fascinating: however, to many engineering experts, the printable gun concept is also a worrying one. If successful, the ability to mass-print firearms would potentially result in a large number of unregulated guns on the streets. If unsuccessful, the home-printed weapons could misfire, resulting in injury or even death. This new technology, like any innovation, carries risk as well as reward.

In a nutshell, three-dimensional printing technology is fascinating, useful, and certainly a stepping-stone on the path to full-blown object replication. Medical-grade devices can be used to create vital tissues, which restore health and help humanity. Home-based units can be useful to consumers and to inventive individuals who want to produce three-dimensional concepts. Because 3D printing technology also has the potential to produce potentially dangerous items, however, its advancement should be closely monitored.

Recent Design Awards Winners and the Process Inspired Trophies They...
news via Core77