4 Reasons You Aren't Getting A Job 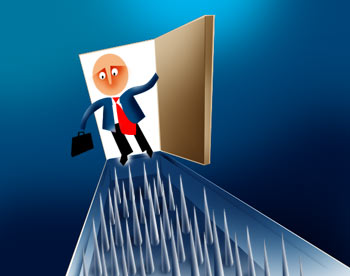 So, you've been out of work for a long time and still aren't getting job offers? Are you ready to give up? If so, you aren't alone. There are lots of people in the same situation. The job market is tight, and the best way to get a great job is to compete and do whatever you can to make yourself stand out.

If you haven't been able to find a job, maybe it's time to try something new and take a risk. After all, if what you've been doing hasn't been giving you the results you want, there is no reason to think that continuing to do it will suddenly give you something different. It's time to shake things up and try a new approach.

If you aren't getting job offers, here are 4 reasons you might be sabotaging your career:

You wait for someone to get back to you - No one is just going to hand you a job. Submitting applications and resumes and then sitting by the phone might have been enough to land a great job a decade ago, but today, it just doesn't cut it. If you apply for a job and don't hear anything back, give them a call and follow up. Pursue each opportunity and show that you are enthusiastic and persistent. Take ownership of your search and follow up on each job lead until you get a "No". Don't just wait and hope you'll get a phone call.

You think that the job search is about you - Your focus shouldn't be just on who you are and what skills and experience you have. The majority of people approach their job search from this angle, but it's rarely effective. Change your approach by focusing on the company. Who are they? What do they need? What are their goals? What can you bring to the table?

You have a bad attitude - Negativity shows through in everything you do. If you have a bad attitude, think that you are owed a job or don't expect much from an interview, you'll probably not get a job offer. It's hard when you're out of work to keep a positive attitude, but it's important. Do whatever you have to in order to take care of yourself and keep your spirits up. Enthusiasm and passion are contagious and make a much better impression than negativity.

You are stuck in your ways - If you aren't willing to change or take risks, it really hurts your job search. Use your resume and cover letter to show that you are up-to-date by adding links to your Linkedin or Twitter profile. If your knowledge base is out of date, take a few refresher courses or enroll in an adult education program. This makes it clear to a prospective employer that you are flexible and committed to furthering your career.

If any of these mistakes sound familiar to you, don't worry, they are all fixable. All you have to do is recognize where your problem areas are and take steps to minimize them.

Have you ever found yourself doing one of these? Please share your thoughts in the comments.