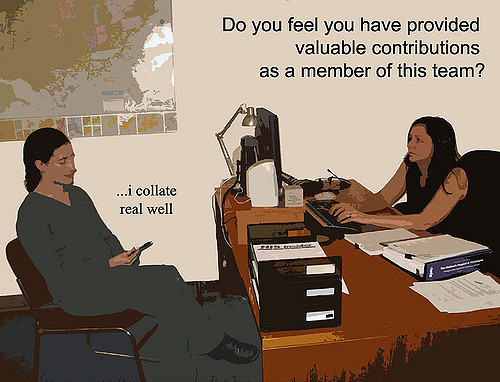 Performance reviews can become nerve-wracking experiences for both the employee and the supervisor, particularly if there is bad news involved. On the one hand, you need to be honest with your co-worker when it comes to improving his performance, but on the other, you do not want to come across as overly negative. Discover five mistakes employers make during reviews and how you can avoid them.

Delivering unpleasant news is part of having performance reviews, but that does not mean you should use negative verbiage when delivering your critique of someone's work. Rather than saying, "Here's what I think is wrong with you," try starting out with "Here are some suggestions for improving how we work together and how we work on the team."

Use the sandwich method during performance reviews and when giving feedback in general. The top layer of the sandwich is a piece of bread that represents something positive about the employee. Then you talk about a criticism before ending the conversation point with another positive. For instance, "I really liked how you handle the Smith case, but a little more communication with regards to client contacts would be helpful. Mr. Smith was very complimentary about how you discuss his forthcoming appointments."

Every conversation point should have some kind of data to back up what you're saying, which means leaving out emotional terms. Instead of "You've been late a million times this month," say "The time log shows you've been 15 minutes late 16 out of 20 days this month." Leaving emotions out of performance reviews prevents defensiveness during an already tense situation. Rather than make sweeping generalizations about an employee's work, be specific on each point.

Just like job interviews, performance reviews are conversations rather than a lecture. No one likes being talked down to in a professional environment because it's demeaning, belittling and purposeless. Start out by saying, "I'm really glad we're having this conversation, Joe. I'd like to start with your most recent work over the past two weeks and work backwards. Do you have any questions before we begin?" This sets the tone for the rest of the review.

Emotions can run high during a review, but that doesn't mean you should focus on someone getting upset. Avoid asking, "Why are you upset?" Instead, put the onus back on you and say, "We seem to not be connecting on this issue, and it seems I'm misunderstanding you. Can you talk to me about that?" The second statement shows you own the problem, which takes the pressure off the employee.

Performance reviews offer great ways to get in touch with how an employee feels, thinks and acts with regards to their job duties. Use this time wisely by avoiding these five mistakes employers make and create an uplifting environment for everyone involved.

Is Asking for Salary History a Mistake?
article posted by John Krautzel