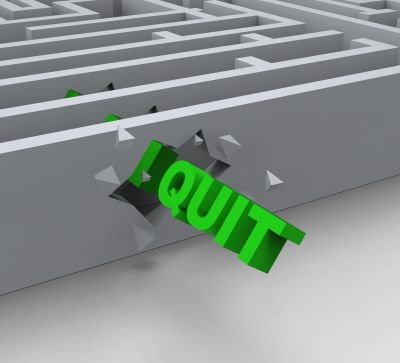 Leaving a position at some point in your career is inevitable, unless you were really lucky and stayed with one firm or owned your own business your entire life. Interestingly enough, there seems to be a pattern of behavior when it comes to the way people quit a job. See which of these seven ways to leave your employer apply or appeal to you.

Two researchers identified these seven ways to quit a job after interviewing hundreds of people. The study aimed to examine what happens after someone decides to resign. There is plenty of research detailing the reasons why people quit, but not so much regarding how they quit, the researchers noted. According to their findings, these ways can range from totally dignified or normal to a complete cutting off ties.

Of the 476 participants in the research, 31 percent chose to quit a job using the standard, by-the-book approach. That means giving two weeks' notice, in writing, thereby providing employers sufficient time to find a replacement. This method represents the most proper way to leave your position after carefully weighing your options, remaining honest with your employer and honoring confidentiality agreements. However, by the book doesn't always happen.

The second-most popular way to quit a job, cited by 29 percent of respondents, is to go by the book but refusing to give a reason as to why you're quitting. This is what researchers called "perfunctory." Employees resign with precise techniques, being very careful not to give away any more details than what the previous employer deserves to know.

Approximately 10 percent of those interviewed say they cut all ties and burned bridges when they left a job. Forget two weeks' notice. These situations occur suddenly, without warning, and sometimes culminate in a breaking-point incident wherein the worker tells off his supervisor and leaves in a huff.

Around 9 percent of workers avoid having contact with a previous employer or supervisor. This occurs when you quit a job using an email over the weekend, going through HR or having some third party contact your old boss for you.

5. Thanks for the Opportunities

Another 9 percent of respondents employ a grateful goodbye approach. In addition to giving enough notice and breaking away on a good note, you even help your supervisor find your successor. There's plenty of mutual love in this method, even though the employee decided it was time for saying goodbye.

Some workers, around 8 percent, leave while keeping their managers in the loop the entire time. Think about planned absences such as applying for school or trying to move to another location to be closer to family. You tell your supervisor far in advance your goals and then keep him updated regarding your progress towards leaving your job.

About 4 percent of those interviewed said they impulsively resigned as a spur-of-the-moment decision. This happens when frustrations build to a breaking point or some incident at work causes the employee to break ties with the company.

Although the right way to quit a job means giving enough notice and having a mutual admiration society, clearly that's not always the case. Which of these ways have you resigned?