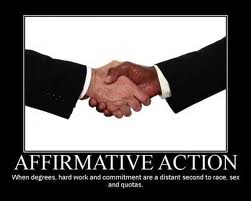 I have come a long way in my thinking on affirmative action.  I have come to accept many aspects of it and this from a conservative view.  One reason goes to my experience taking Calculus in college.

I am an A or B student in math.  In fact, the course below Calculus, Functions, I got an A in it.  But I failed Calculus miserably.  And I will say that much of the fault goes to my teacher.  He was absolutely brilliant.  However, he just could not teach!  Math came too easy to him.  The “too easy” factor, by the way, is why most managers or batting coaches were marginal players.  They had to learn everything about baseball; in the case of a manager, or hitting; in the case of a batting coach, to stay in the league.

For the good players sports was too easy.  Now I am not saying the good players goofed off through life; it takes a lot to be a ballplayer in physical training.  I am talking about from a raw ability point of view.

Now; importantly, notice how in my example everyone involved in the sport was not a stiff, as they say.  They all belonged in baseball, they just had different abilities.  I believe that a lesson like this can apply to affirmative action; though all analogies break down after a bit.  When an applicant applies to a college to teach, the person who got into the best school and had the best grades is not always the best teacher.

I think; therefore, applicants who went to small colleges should be given a real look too.  Also, student relatability should be a factor.  Can a teacher empathize with a sincere and struggling student like a batting coach with a sincere struggling player?

As far as dealing with affirmative action from a race or sex point of view, there are points in favor of affirmative action here too.  For instance; in a city that is mostly African-American, a police force that is all white has an unintended potential to cause problems that are not the fault of the officers involved.

I lived in black neighborhoods and the people I became friends with did not like the police.  They felt they were picked on for being black or arrested for things that they felt should have been legal, like drinking a beer in front of their houses that they thought no police officer would have arrested them for if they lived in a $ 500,000 a home area.

And it does not matter if the perception is wrong, it is there.  This is where having a substantial presence of black officers on a force helps.  Yes, some African-Americans will say they sold out, but you can’t have it both ways.  You can’t demand equality then shun equality.

Affirmative action is also good on Fire Departments.  If fires occur and more black owned businesses burn down in a month than white owned businesses, African-Americans citizens in the past have felt that the government favors white business owners if the force is all white.  It doesn’t matter if the fires are the result of black owned businesses being located in more fire prone areas; it is what is perceived that counts.

As far as boardrooms, 11% of the population is African-American and even more are Hispanic (And yes, even more are women).  You don’t get a pulse on the culture as an observer; you get it by having parts of the whole culture and weaving them together.

Again, I am talking about affirmative action for those who are in a range of talent, not lowering standards to get so many people of a certain race or sex into a job.  A firefighter has to be able to lift heavy objects for instance.  On the other hand, applicants don’t need to score all A's, as long as they are not scoring all C’s and D's either.