A Tale of Two Roofs 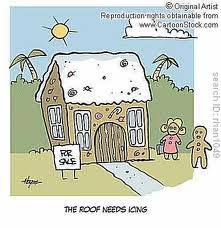 I had the privilege of watching two work crews on the job repairing different roofs just today. It's a good time to repair a roof as roofers would rather do their job on a cool fall day than on a hot summer day with the sun baking the composite shingles.

One crew I watched was headed by a general contractor that I know, the other was a slap down crew. The differences were apparent immediately.

The slap down crew worked with no scaffolding, though they did employ ropes. The workers were also improperly dressed as some wore tennis shoes not work boots. There were ten of them up on the roof, so I imagine that they weren’t paid much to the man as no one could use so much labor and pay them well.

They worked hard and fast, true, but they also didn't put the shingles down diagonally. The reason this is important is that the warranty is voided if the shingles aren’t placed as I just described. Also the brand of shingle was cheap.

The contractor who I know had a crew of one besides himself. He worked methodically. He used scaffolding to insure worker safety. His worker was well paid and dressed appropriately. The shingles were properly laid and of good quality. And the shingles were also made in America.

Now to be honest, we have all heard horror stories about bad roofers, even those who use well paid workers. I know of a roofing company that had to replace a piece of rotten plywood on a roof and used the hole created in the roof before they put the new plywood in place as a dump hole for their trash. Needless to say, the owners were less than thrilled and called the police when they discovered that their attic was filled with old and cut parts of shingles.

There are other things crooked roofers do to save time, material or money to improve their profits. Not putting a roof on diagonally is one way with the roofers just lining the shingles up and ping, ping, pinging with a nail gun instead of doing the roof with care which takes more time. Sometimes roofers like this will not even take the old shingles off, opting instead to shingle over them. Too, they will use damaged shingles

Another trick these scammers use is to butt shingles together instead of overlapping and cutting them; less material, less cost. The roofers will also carelessly place nails as they speed through the job, such as in the roof's valleys where nails in water concentration areas lead to leaks over time. Often too, roofers that skirt on material will skirt on costs by using cheap nails, caulking and shingles. They will also take advantage of the fact that they can use laborers that are in the country illegally so as to pay them less.

Too be fair, the undocumented workers are making ten times what they made at home and most don’t worry about not having insurance as they will simply walk into the emergency room, default and let the American taxpayers pay the bill. What is unfair is that the American contractor doesn't have the same advantage for he needs to have credit to make his purchases and thus has to pay his medical bills which raises his costs.

To conclude this blog about a tale of two roofs, how do you make sure that you get the best roof or any work done on your house for that matter for the best price? That blog next week.

The Absolute Sexiest Movies On Netflix
news via Refinery29

A former Tesla engineer says the company silenced her entire team a...
news from Markets
The most heroic airline pilots of all time
news via Yahoo News - Latest...