Apologize Your Way To Success 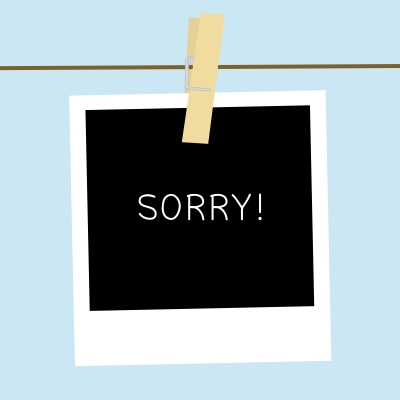 “Love means never having to say you’re sorry.”  This was a line from a 60’s movie, “Love Story,” with Ali McGraw and Ryan O’Neal.  That may be love, but leadership means you have to say you’re sorry when you make a mistake.  At least that’s what an article in Human Resources Executive reported about the relationship between business success and admitting failure.

A survey from the Boston-based Forum Group showed that most leaders encourage their employees to learn from their mistakes.  To learn you first have to admit you’ve made a mistake, apologize and then work to make things right.  While leaders want their employees to be honest about making mistakes, the same survey showed that only 16 percent of employees said their leaders did the same thing.  It seems that admitting mistakes and making amends is relegated to lower-level employees.

Unfortunately, many leaders don’t realize that the simple act of admitting mistakes and asking forgiveness is one of the strongest acts of leadership.  Rather than make a leader appear weak, employees can identify with a person who makes a mistake (doesn’t everyone?).  It’s human nature, and makes the leader a part of the team, one of the “guys” if you will.

It’s difficult for a leader to appear honest if they aren’t willing to admit their mistakes and that they have weaknesses.  Everyone does.   The interview question, “tell me about your strengths and weaknesses” is a classic.  Just about every interviewer poses that question.  It’s a pivotal question for honesty, resourcefulness, problem solving, interpersonal relationships and confidence.  It’s easy to talk about strengths and accomplishments.  It isn’t comfortable talking about times when you screwed up or fell short of expectations.

One of the reasons it’s such an important question is it forces an applicant to make an honest assessment of his performance and admit that he makes mistakes.  The problem is, an applicant doesn’t know the intention of the interviewer.  Many applicants make the mistake of giving an example of a failure or shortcoming and leave it there.  Weaknesses and mistakes are OK, as long as you are learning from them.  An interviewer wants to know how you’ve failed in the past, what you did about it, and what you learned for the future.

Since it’s such an important question, and sure to come up, applicants should be prepared for a specific example and how they turned things around.  For example, what if you made an error closing out after a day’s sales and somehow was short a thousand dollars.  If you tell that story and leave it unresolved, it may be the end of the interview.  But if you were able to retrace your steps, find the error and recover the money through some investigation and working things out, you show resourcefulness, determination, analytical skills and accountability.  These are traits any employer would welcome on his team.

Everyone makes mistakes.  Some try to cover them up, place the blame on someone else, or try to make the mistake seem like nothing at all.  None of these actions are real resolutions or show leadership.  The ability to admit mistakes, learn from them and move on is an example to others and makes you an applicant worth a second look.