Are Data-Transmitting Mannequins the Future of Shopping? 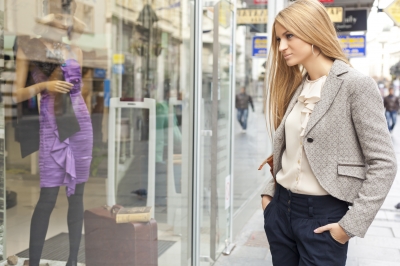 Retailers use the EyeSee to collect information about shopper demographics, as well as how shoppers move through a store and select items. If the EyeSee shows that the majority of shoppers turn right upon entering a store, retailers know to put their most valuable items on the right-hand side of their store layout.

However, the world of data-transmitting mannequins changed in early 2014 with the release of the VMBeacon device. Retailers install this device directly into their mannequins. From there, the VMBeacon device connects to the Internet and uses Apple's iBeacon technology to send product information directly to consumers' smartphones.

The VMBeacon device is appealing to retailers because it is one more way for retailers to evolve alongside new shopper habits. Shoppers rely more and more on smartphones to compare prices while in retail stores, and many shoppers visit retail stores to test an item's quality before pulling out a smartphone and purchasing the item online from a competitor. Since the VMBeacon works directly with shopper smartphones, it preempts the decision to buy from a competitor and prompts shoppers to purchase directly from the retail store.

The VMBeacon app also adds a sharing component. As a recent TechCrunch article notes, each VMBeacon notification is instantly shareable on Facebook, Twitter and other social networking sites. Users who share items with friends help increase a retailer's reach and boost its influence and sales.

There's one more genius component to VMBeacon: it transmits data to customers' smartphones 24 hours a day, whether or not they are inside the associated retail store. If a store places VMBeacon data-transmitting mannequins inside storefront windows, for example, then customers with the app receive product information every time they walk by the windows. It is a great way to continue to market to consumers even outside of traditional retail hours.

Data-transmitting mannequins such as the EyeSee and the VMBeacon-enabled mannequin are likely to be the future of shopping. Expect to see more and more mannequins collecting shopper information, transmitting coupons to smartphones and otherwise using customer interactions to drive retail sales.