Are You a Rhino or An Ostrich? 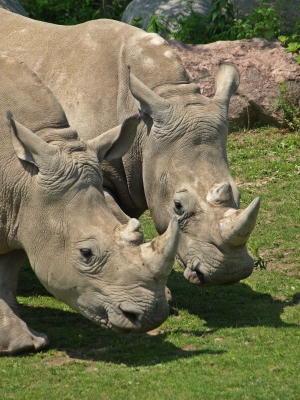 Working in the sales industry exposes you to many challenges, but handling conflict is often the most difficult. Whether you are dealing with an upset customer or a combative colleague, your success depends on being able to resolve problems and find solutions that benefit the entire team. If you are afraid of handling conflict, look to the animal kingdom for examples of what you should and shouldn't do.

Before you attempt to resolve a conflict, you need to determine if you are going to behave like a rhino or an ostrich. The ostrich buries his head in the sand instead of facing problems, while the rhinoceros charges ahead without regard for other animals. Both creatures have some negative qualities, but it's better to be like the rhino. You need to charge ahead instead of ignoring the problem and hoping it goes away. If you're going to behave like the rhino, however, you need to charge at the right time and with the right attitude.

Most people see conflict as a negative thing, but it can actually be positive. It all depends on your approach. If you are tasked with handling conflict, you should see every confrontation as an opportunity to coach someone through a tough situation. Conflicts only turn into arguments when people refuse to respect different opinions, so make a real effort to listen to your colleagues and subordinates. Even if you don't agree with their opinions, you don't have to be disrespectful or confrontational.

Handling conflict is much easier if you change your approach. Instead of treating everyone the same way, tailor your feedback to the situation at hand. Just because you had to be tough with one employee doesn't mean you have to be tough with every employee who has a problem. Every time you meet with a team member, your preconceived notions probably shape the way you handle the situation. If you want to get better at handling conflict, you need to do away with assumptions and handle every problem on a case-by-case basis.

If you are responsible for handling conflict, you also need to change your definition of a difficult conversation. You may be uncomfortable delivering negative feedback, but that doesn't mean the conversation has to be a difficult one. Whether you are communicating a policy change or coaching an employee through a sales slump, you need to be objective and approach the conversation with a positive attitude. Instead of sticking your head in the sand, you need to tackle the problem immediately.

Whether you are a sales manager or an entry-level salesperson, handling conflict is one of your most important duties. Changing your approach to confrontation can help you build better relationships, making it easier to succeed in the competitive sales industry.