Artificial Leg, With Feeling, Has Been Developed 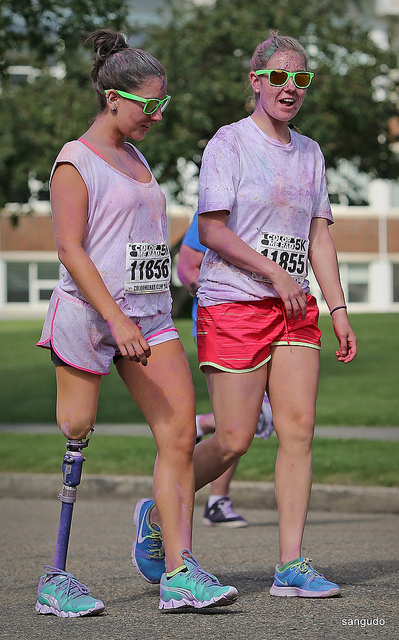 Researchers in Vienna, Austria, have developed an artificial leg that allows an amputee to feel stimulation at the body's contact point with the prosthetic technology. The scientific breakthrough may help people with artificial limbs live better lives thanks to increased mobility and reduced pain.

Doctors at Linz University fitted an artificial leg to a patient who had part of his leg removed eight years before he wore the experimental prosthetic. The amputee said he cannot sleep more than two hours due to extreme pain and has to take morphine regularly.

Researchers created stimulators in the attachment of the leg that connect to six sensors in the foot of the prosthetic technology. These sensors send electrical signals to nerve endings in the amputee's leg stump. The artificial leg allows the person to sense pressure, glass, gravel, concrete and sand. Wolfgang Rangger, the amputee, says he can even feel a single, small pebble with the sensors in his new limb.

The reason Rangger lacks pain stems from how the body attempts to resolve nerve endings in an amputated limb. Nerves at the end of the stump no longer receive electronic impulses from the hand or foot, despite the fact the limb no longer sends signals. This may create phantom pain in an amputee, and a normal artificial leg or prosthetic arm does not stimulate nerves. Regular prostheses simply try to make movements more normal. Pain ranges from itching or tingling to sharp, constant pain that prevents sleep.

The Linz University researchers have become the first scientists to create an artificial leg with feeling. Rangger's brain receives stimulation from nerve endings in the leg stump, and his excruciating pain has gone away. Normal prosthetics also caused the patient difficulties.

Lead researcher Dr. Hubert Eggar has led groundbreaking research into mind-controlled prostheses in which the brain sends signals to nerve endings rather than nerves receiving stimulation from a limb. The sophisticated new prosthetic limb costs between $12,000 and $20,000 to build.

Contrarily, a mechanical hand made in 2011 uses simple springs, hooks and mechanical levers to create precise movements in three knuckles on each finger and two for the thumb. The agility comes from advanced springs that react to motions further up an amputee's arm, and the artificial hand has no electronic components whatsoever to create a low-cost alternative easily manufactured. This low-cost limb represents a practical solution to amputees.

Scientists and doctors can combine additive manufacturing, medical sensors and mobile technology to create artificial limbs with even greater dexterity. The major difficulty for most amputee remains the high cost of new technology. As insurance companies recognize the value of reducing pain medication and improving the quality of life, new prostheses may eventually come down in price. More companies need to invest in this type of breakthrough to lower upfront costs as well.

This artificial leg presents a new frontier in medical science. When the technology moves forward, many people with mobility difficulties may discover pain-free freedom thanks to sensitive technology that gets smaller, faster and more sophisticated.

Photo courtesy of Sangudo of Flickr.com