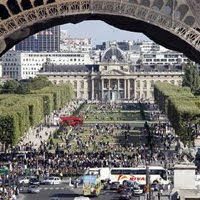 Today's luxury European hotels are being challenged by some Asian "comers." These include some pretty big names in the five-star hotel industry.

The Shangri-La, which opened in December, offers a premium view of the Eiffel Tower. The Mandarin Oriental will open this year. And the Peninsula, Hong Kong’s most prestigious hotel, is expected to open in 2013 near the Champs Elysées.

The Asian invasion is raising a few eyebrows among the Euro Hotel elite. Watching closely are such hotels as the five-star Plaza Athénée, which belongs to the sultan of Brunei. The top hoteliers are determined not to "be overtaken and lose market share." It's no secret that the Asian luxury hotel scene has been inching up the high-water mark of service, amenities and design for several decades now.

Luxury travel accommodations have been undergoing changes. The major players have been upgrading rooms and investing in training and retaining staff. The Le Bristol Hotel Paris--one of the last family-owned luxury hotels in Paris--has been steadily refurbishing its rooms. So has the Four Seasons’ George V.

Some top Euro hoteliers have welcomed the Asian competition and expect more tourists from Asia to visit Paris. A recent report released by the International Luxury Travel Market (ILTM) noted that the high-end travel industry is reporting confidence "in the face of an increasingly buoyant market."

In the U.S., the sagging economy is picking up steam and observers believe price hikes may be on the horizon because corporate America is traveling again.