Can Radical Homemaking Save You Big Bucks? 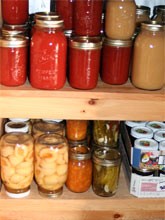 With so many people out of work and having a hard time finding a new job, there have been several new cultural backlashes that have sprung up. First, there was/is the Occupy movement. The movement, being a lose conglomeration of many different activists groups, all united in their anger at the financial system, has captured the attention of those in power and the imagination of the 99%. Another group that has cropped up are those who have developed strategies to produce more than their families consume and have found ways to spend less money and even have given up on having a job in the traditional sense.

It's called "Radical Homemaking", and it is challenging the way that people think about money, time and success. For those involved in the movement, it means that they are always looking for ways to make the most of what they have, produce more of their own food and even help set up barter systems and other community programs to help each other.

If you're interested in stretching your budget or want to take a break from "the system", here's how:

Question your attitudes about money and material goods - The first step is to pay attention to your own attitudes about money. For example, would you look down on someone who didn't have a car? Does growing your own food make you feel poor? We have all been subject to a constant bombardment of advertising all of our lives. This has affected the way that we think about material goods and money. We think that we need to have two cars, the latest in electronics and we even deserve to pay other people to grow and sometimes cook our food for us. Once you understand how you look at material goods, start questioning them. Would you be okay if you walked to the grocery store? What would you do without an iPod? It's important to know the answers to these questions before you get started.

Begin to renounce the things that you thought were important - This part is hard at first, but it gets a whole lot easier as you go. Start with a few ideas that you think you can get rid of. Maybe you don't have to carry a high debt load. Maybe having credit cards only serves to keep you in debt and tied to the financial system. During this time, it's important to do the research and find answer to all of your questions. Find out what you can do instead of having the credit card debt or having a second car. During this time, you'll likely inspire yourself to go further and further outside of the box.

Reclaim your life - This step is where you set out to learn the skills you need to make the change. Maybe you'll learn knitting or how to garden. As for me, I have recently set out to learn all there is to know about catching and eating crabs. I live on the water and crabs are a great food source that's free. As I learned more about how to pick crabs, I realized that I had been wasting so much every time I ate them. Now, I can turn 6 crabs into a batch of crab cakes and still have a little meat left. During this phase, some people learn about homeschooling, socially responsible investing, canning or even how to raise bees.

You might have to give some things up - Once you've mastered your new skills, there may come a time when you want to give some of it up. Maybe you want to get a full-time job, or buy ready-made scarves instead of making your own. No matter what it is, you'll be able to take your experiences with you and be a better employee, a better sweater buyer and you'll be consuming because you made a choice, not because it's what you've been programmed to believe is true.

Would you ever consider radical homemaking? Why or why not?