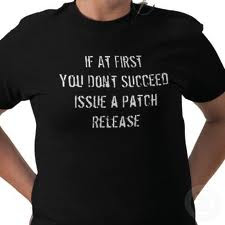 An overwhelming majority of software projects don't come in on schedule and fail to deliver the level of quality initially promised. So say dozens of studies taken ever since software engineering emerged as a field decades ago. Large software projects in particular pose a number of unique challenges.

One of the problems plaguing software projects is that they often reach the coding stage before requirements are clearly spelled out. Internal agreements are often later distorted by customers who insist on subsequent modifications. Customers ask for these "mods," unaware or unconcerned about the impact these "upgrades" can have on budgets and delivery schedules. Saying "no" to this kind of "feature creep" can be a challenge. To help overcome this problem, experienced managers suggest developing a strong relationship with the customer and the marketing staff to help adhere to initially imposed limits and expectations.

Software engineers can also become possessive of their projects, which can easily balloon into "a life's work." This overdeveloped software often becomes a "ball and chain" to once agile software—sacrificing speed, efficiency and ease of use.

Another challenge in developing software on time and within budget is the personality of your average software developer. Many are creative and highly solipsistic. Getting individuals like these to focus on time and specific performance constraints can be difficult. The other problem is that attempts to remedy over budget and time-slipped projects aren't as simple as just adding more bodies. Plus, adding more members to the team adds to the coordinating effort needed to keep everyone pulling in the same direction.

For an additional perspective, check out the video:

Register
Sign In
Digital evidence in the video age: Vendors' views on the big issues
news via PoliceOne Daily News

From Cozmo to Vector: How Anki Designs Robots With Emotional Intell...
news via Design News