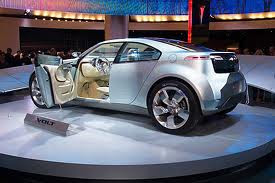 The much talked about Chevy Volt will finally be appearing in showrooms in California, New York, Michigan, Washington DC, Connecticut and New Jersey. Roll out to Chevrolet dealers nationwide will continue over the next 12-18 months.

The Volt, a plug-in electric vehicle with a "range-extending" internal combustion engine, has been described as a breakthrough, game-changing car of the future. Car buffs call it a genuinely all-new car, unlike any vehicle they have ever driven.

While the Volt may be small and easy on gas, it's not so easy on the wallet. A $41,000 sticker price is a bit steeper than your average compact. Softening the blow somewhat is the federal tax credit, which takes the sticker bite down to a more palatable $33,500. It also makes the Volt slightly less expensive than a traditional hybrid.

Citing engineering excellence and attention to detail, the motoring press has lauded the Volt's advanced power train, which allows the car to run as an electric vehicle, a series hybrid, or a parallel hybrid. It all depends on how far and how efficiently you drive it.

The four-seat, four-door plug-in hybrid hatchback features a lithium-ion battery pack that can power the car's 149-horsepower (111-kilowatt) electric motor for an estimated 40 miles in the city. After that, the gasoline-powered inline-4 engine basically powers the electric motor for as many as 300 additional miles. Electricity costs for recharging the battery are low—just a fraction of what you'd pay for gas to cover the same distance.

Many consider the Volt the most advanced fuel-efficient hybrid on the market. Time will tell.