Clothes May Soon Power Your iPod 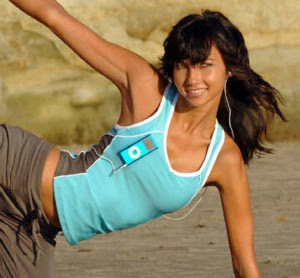 You may soon be able to power your iPod or Blackberry by boogying in your t-shirt or jeans. A UC Berkeley research team has recently developed fiber nanogenerators capable of generating electricity from mechanical movements like twisting and stretching.

UC Berkeley researches pioneered the near-field electrospinning technique that allows them to create and position the polymeric nanogenerators 50 micrometers apart in a grid pattern. This offered more precise placement of the nanofibers onto a surface, which enabled researchers to properly align the nanofibers to keep the positive and negative poles on opposite ends—much like the poles on a battery.

Described in a recent issue of Nano Letters journal, the electrical outputs obtained from nanogenerators vary from 5 to 30 millivolts and 0.5 to 3 nanoamps. The more vigorous the motion, the more power generated, which means knees, elbows and other joints would be ideal places for sewing in nanogenerating fibers. Would nanofibers wear out their "juice" generating potential? Not to worry, say researchers. Power levels seemed unaffected after stretching and releasing the nanofibers for a full 100 minutes.

In practical terms, over 100,000 nanofibers would be needed to power an electrical watch and one million fibers would generate enough current to power an iPod. But the tiny nanogenerators are about 100 times thinner than a human hair and one-tenth the width of common cloth fibers. They could easily be weaved into clothes with no perceptible change in comfort for the wearer.

For an additional perspective, check out the video, One Day Your Pants Will Power Your iPod