Consider Alternatives Before Embarking on the Almighty ”Paper Chase” 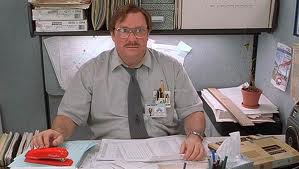 There’s a final scene in the movie Office Space, where Peter (Ron Livingston) has given up his drone computer programming job in favor of working outdoors in construction with his buddy Lawrence  (Diedrick Bader).  When invited to come back to the world of cubicles and computer programming with his friends, he tells them he’s happy working in the fresh air.

There’s a lesson here for those who are thinking about spending four or more years and, in some cases, well over a $100 grand chasing a college degree. Some people just aren’t meant to spend 10-hour days in a neon-lit cubicle. But that’s what most degrees promise—at least initially, until you work your way to the top and can get out of the office. Those first 5 to 10 years can feel pretty unrewarding to someone who likes to work outside.
Our increasing reliance on computers and the rising cost of office space means today’s workers will be stuffed into smaller and smaller cubicles. There will be less human contact as virtual workers increasingly rely on emails and programs that connect them electronically but disconnect them personally.
The question to ask yourself before you embark on the almighty “paper chase” is: “Will I be happy working long hours in a cubicle?  Granted,  a degree will afford you some level of social status. You will belong to the “educated class” with a greater than average likelihood of white collar success. But keep in mind that your heavy student loan load and low initial salary will keep you from vacations, a new car, and perhaps even condemn you to living with your parents for the first couple of years.
If you like working outdoors, you might consider going to technical or trade school. Construction jobs in rebuilding our nation’s infrastructure will be begging for qualified workers. Solar, wind and geothermal energy projects will also require skilled workers to get them from blueprint to reality.
Many community colleges offer degrees and certificates in these growing fields. Costs for attending these schools are often subsidized by government and/or industry. Which means graduating with little or no student debt. Better still, many jobs in these fields are unionized, so you can count on a good starting salary with guaranteed overtime pay (office workers are seldom paid for overtime—they simply agree to a fixed salary regardless of how many nights and weekends they put in). You’ll also be free of office politics. Best of all, you’ll more than likely be working outdoors (a healthier alternative to working under neon lights all day).
I guess, what I’m saying is that a traditional college education may not be suitable for everyone.  The world of work is changing, confining office workers to “drone” tasks while offering  skilled “hands-on” workers more opportunities. Comments or suggestions are welcome.