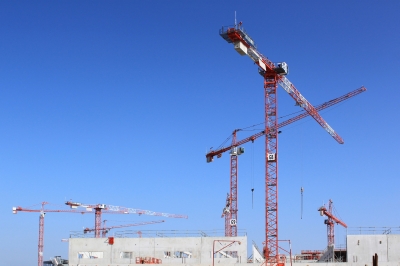 Throughout the nation, the construction industry appears to be in a slow upswing following poor building numbers during and after the recession. From the snack industry to residential housing, construction jobs in some areas are peaking at post-recession highs, though consumer confidence hasn't yet resulted in building in all locations.

Data from the Associated General Contractors of America indicates that Midwest builders saw a year-over-year increase in employment during July 2013. Six states reported construction-industry job numbers, with Missouri, Illinois, Michigan, and Wisconsin benefiting from 14,200 new construction jobs. Indiana and Ohio lost 11,500 jobs for the period, resulting in a regional increase of 2,700 jobs. The upswing may not seem like much, but it's a welcome respite from the downturns of recent months. In April 2013 alone, Ohio and Illinois lost a combined 22,100 construction-industry jobs, so any addition is good news. The AGC notes that some areas in the Midwest are benefiting from growth in the public sector, but overall employment levels are still 25 percent below peaks seen in 2006, so there's still plenty room for improvement.

In Nashville, homebuyers are driving a local upswing in the construction industry. The Greater Nashville Association of Realtors released sales figures for August 2013 that showed an 18 percent year-over-year increase in home closings. Despite peak interest rates and a 10.8 percent year-over-year increase on the median price of single-family homes, realtors in the area were able to sell more than 3,000 homes for the fourth straight month. Metrostudy regional manager Jason Brown expects sales numbers to continue gaining strength as additional supply reduces the year-over-year price appreciation of homes in the area. Metrostudy research indicates that 500 more homes are under construction in the area than there were at this time last year.

Housing isn't the only driver of positive growth in the construction industry. According to a 2013 construction report from niche publication "Baking and Snack," ninety-three significant baking-related construction projects were completed or begun within the previous eighteen months. Although that number falls slightly short of 2010 peaks, it's well ahead of 2009's number of seventy-five. This year's report indicates total construction activity worth $1.3 billion, which is $300 million more than last year.

Good news travels fast, but it doesn't always hit the market quickly. Reports in Southern California indicate that homebuilder confidence for August almost reached an eight-year high, but new housing construction isn't keeping pace with positive feelings. Some reasons for the disconnect include builder credit-access woes, lack of suitable land, skill deficits, and rising construction costs. According to the National Association of Home Builders, feelings about current sales are positive, but builders are treading lightly when it comes to new construction.

From sales numbers to jobs, as consumer confidence rises, the construction industry experiences an upswing. Data from across the US shows project and job increases in numerous areas, though most regions are not reaching prerecession peaks.

College grads should have a relatively stress-free job search this ...
news from Markets

Looking Ahead at 2014 Construction Trends
article posted by Staff Editor