Do What It Takes to Get the Job You Want 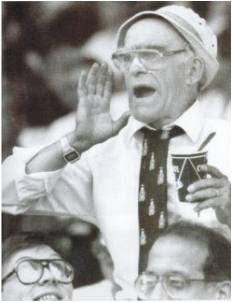 A number of years ago on a sunny Sunday afternoon my wife and I attended a Detroit Tiger baseball game. We were seated in the left field stands watching the game, when a little old man walked up in front of our section. He proceeded to announce that, if we would help him, he was going to “get the entire stadium of fans to do the wave”.

Immediately, this delightful character launched into his cheer by yelling the words, “ah one, ahhh two, ahhh THREE! At this point about thirteen children and a few adults stood up and waved their arms and sat back down. I thought to myself, “hmmph, that’s that, there was no way he was going to get the whole stadium to do the wave”.

Persistence Pays
Well, this gentleman was bound and determined to succeed. Before he went into his next cheer, he reminded us that if we stuck with it, we would soon “get the whole stadium to do the wave”. About the third or fourth try, my wife and I couldn’t resist and we stood up cheered and did the wave. Interestingly, each time we did the wave, the crowd of people participating, went further and further around the stadium until it came right back to where it had started. At this point in time the entire stadium of about 35,000 people burst into applause, all aimed at this little old man standing in front of us. It was like experiencing a giant electric wave of energy that swept over the entire stadium and came right back to the spot where it originated. I was flabbergasted.

I had to meet this man and learn what motivated him to do what he had just done. A few innings later, I saw him in front of a hot dog stand with a line of children waiting to get his autograph. I got in line and patiently waited until my turn came to meet him. I introduced myself and then asked him why he would lead a crowded stadium of people to do the wave?

Secret Revealed
He explained to me that he enjoyed getting people to enjoy the game by participating in his cheers. He felt it helped boost the morale of the home team and it was fun to do. Then, in a gesture I will never forget, he looked me square in the eye, and with a wink, he added, “And I am just determined enough to do what it takes to get those kind of results”.

As I walked back to my seat, I realized I had learned a profound lesson. That lesson was, if I was going to accomplish anything great in my life, I was going to have to be determined enough to do whatever it took to get those results.

If you are interested in a better career in construction visit www.ConstructionJobForce.com


Tom Borg is president of Tom Borg Consulting, LLC. He is a business consultant, speaker, coach and author. He helps companies and organization become more profitable by increasing their value and lowering their costs through the professional development of their managers and employees.

How to Recover from Unavoidable Job Search Setbacks
article posted by E.C. Power

Is Hiring for a Cultural Fit AND Hard Skills Even Possible?
article posted by Madison Green

Fake News and Freelance Journalism: Tools to Save Your Career
blog post from Make a Living Writing