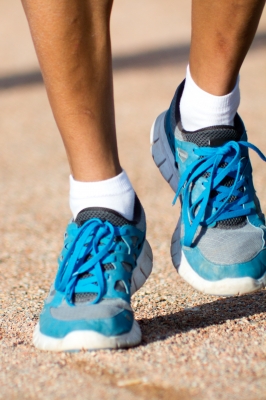 Finding time to fit in regular sessions of moderate exercise can be difficult for many people. With a full-time job and a family to look after, the average person simply doesn't have an extra hour to devote to physical activity. Good news: new research suggests that as little as 60 seconds of high-intensity effort can reap many of the same health and fitness benefits as longer sessions of moderate exercise.

Interval training involves alternating periods of moderate exercise, including walking or jogging, with shorter bursts of high-intensity exercise, such as running, jumping or sprinting. Athletes typically incorporate interval training into their overall training programs that also include longer, less intense workouts, such as hour-long runs or walks.

Over the last few years, scientists have played with the idea of eliminating those longer, steady-state workouts and exercising exclusively with intervals. There goal is to determine how these short, very intense interval workouts compare to traditional, longer-duration moderate exercise.

Researchers at McMaster University recruited 25 out-of-shape men and divided them into three groups. The first group, which was used as a control, was asked not to change anything about their current exercise routines. The second group engaged in a traditional, moderate exercise routine, consisting of riding stationary bikes for 45 minutes. The third and final group was assigned an intense interval training program on the stationary bikes that consisted of alternating 20 seconds of all-out pedaling alternated with two minutes of cool down for a total of 10 minutes. Both exercise groups completed three workout sessions each week for 12 weeks.

At the end of the 12 weeks, researchers studied changes in the men's aerobic fitness, muscular endurance and blood sugar control. Improvements were nearly identical whether the subjects had completed the moderate exercise program or the high-intensity interval program. Both groups saw a 20-percent increase in cardiovascular endurance, along with similar changes to muscular efficiency. Insulin resistance also greatly improved among men in both groups. The men in the non-active control group did not see much change, as was expected.

The good news about this study's results is that it shows that three months of short, high-intensity interval workouts can offer the same health and fitness benefits as longer, moderate exercise sessions. While neither approach is superior, intense exercise sessions obviously offer greater convenience to people who have a hard time fitting physical activity into their schedules.

So is one minute of intense exercise enough? "It depends on who you are and why you exercise," says Martin Gibala, a professor of kinesiology at McMaster University. Professional or elite athletes can maximize performance by incorporating both endurance and interval training into an overall fitness program. Average people who just want to improve health and fitness, however, may be able to reap the benefits of prolonged moderate exercise with just a few intense sessions each week.

Experts agree that incorporating interval training into your regular exercise program has numerous health and fitness benefits. Those who find it hard to devote 45 minutes or an hour to moderate exercise can still reap major rewards from even a small amount of high-intensity effort.