Drones Are Fast Becoming a Reality 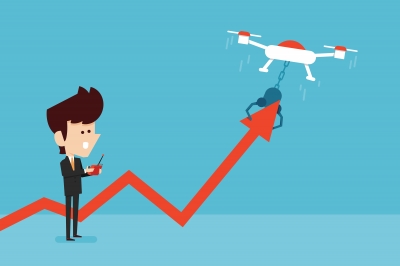 By early 2015, drone technology had advanced to the point that commercial enterprises were using small, remote-piloted aircraft for aerial photographs, overhead inspections and ground-use surveys. When the Federal Aviation Administration issued its first set of rules for drones in February 2015, other countries quickly followed suit.

Amazon wants to use automated drone technology to deliver lightweight packages to customers faster. The initial set of FAA regulations states drones must remain within sight of their pilots at all times, which means using them in not feasible over American airspace by 2017. Indian regulators saw an opportunity and began devising standards for drone use after the online retailer said in December 2014 it planned to test drones in India.

The move reverses a ban on commercial, private drones in India enacted two months before Amazon's announcement. The reason India initially did this is because the International Civil Aviation Organization had not written any regulations on drone usage. Countries such as the United States, Australia and New Zealand created rules for drones on their own, and Indian regulators with the country's Directorate General of Civil Aviation plan to move forward with their own set of rules for drones in a two-month time frame.

Amazon plans to launch drones in Mumbai and Bangalore using its Prime Air service. When the United States spurned large-scale, automated drone usage until safety issues were resolved, Amazon needed to test its technology elsewhere. The crowded streets of two huge urban metropolises in India provide a perfect proving ground for Amazon's delivery system. A pizza was delivered along a crowded street in Mumbai in May 2014, so lightweight packages would seem to be the next in line for drone deliveries. If Amazon's packages can make it through crowds of millions of people, high-crime areas and urban slums, CEO Jeff Bezos can take his case to the FAA for approval.

India's regulatory authority hopes to make applying for drone permits relatively easy with online registration, minimal paperwork and practical licensing. The agency notes it cannot do so and also adopt the strict policies of countries that already have drone rules in place to ensure national security. The concerns of the Indian government leading to drone bans may have revolved around terrorists potentially using drones. However, the opportunity to have a corporation such as Amazon use India as a test site caused regulators to think twice about restricting drone technology to military applications.

The FAA took a cautious approach to developing its rules for civilian airspace. The agency ignored deadlines to approve drone rules as far back as 2011. Amazon balked at the domestic ban and took its testing overseas. The company's success in India could later advance drone adoption in the United States.

Drone technology has already become a part of everyday conversations in America. Widespread use of drones may become a reality in 2017 when new rules go into effect. Look for 2018 to be the year of the drone after companies, researchers and universities apply for drone permits.