Engineering Solar Sails to Take Us to the Stars 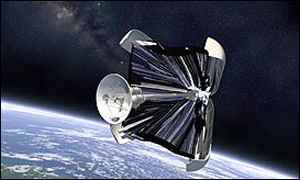 Like ancient mariners who sailed the seven seas using canvas sails, tomorrow's space explorers will use solar sails to take them to the stars. Made of large, ultra-thin plastic sheets, solar sails will be "pushed" by sunlight—essentially light particles or photons. In the 1860s, Scottish physicist James Maxwell demonstrated that light does indeed exert pressure, convincing scientists and engineers that solar sailing can be used to propel spacecraft to the stars.

Closer to home, NASA engineers believe that solar sails are an ideal propulsion system for exploring the outer edges of our solar system. Solar sails don't need huge tanks of fuel and oxygen. And unlike rockets, spacecraft powered by the "wind of the sun" accelerate constantly. So speeds could far exceed those achieved by rocket propulsion.

The engineering part of this science has progressed at a steady and promising pace. In May, Japan successfully launched IKAROS--the first-ever spacecraft to use a solar sail--now headed toward Venus. NASA plans to launch a sail this fall and the Planetary Society has scheduled a launch sometime in 2011.

The biggest challenge facing NASA engineers in their quest to harness solar sail power is to lighten the sail's supporting booms. Reducing the sail's overall mass increases the acceleration imparted by light particles from the sun. Engineers are evaluating a whole new generation of tough, lightweight materials for these supporting structures.