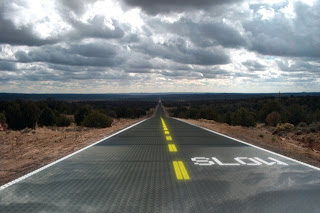 The road system in our area of Southeast Michigan seems to require constant re-engineering and repair. New surfaces and installation techniques abound, but still endure the destructive forces of our severe winters, along with the use as main shipping arteries constantly loaded with trucks.
Which pavement system is the best? Believe it or not, one engineer has a solution, and it doesn’t include asphalt. American electrical engineer Scott Brusaw, co-founder of US-based Solar Roadways, has designed an intelligent road system. Like various fluid and pipe based collector efforts, it can melt ice, warn of maintenance needs and generate electricity. But unlike the heat based systems there isn't a single granule of asphalt in sight.
Rebecca Pool of Engineering and Technology Magazine writes about a recent TEDx conference in Sacramento, where Brusaw said: 'When the phrase 'global warming' began gaining popularity, we thought about replacing asphalt with solar panels that could be driven on. We asked, what if we could make a structurally engineered case that could withstand the forces of 35-ton truck flying over it at 80mph?'
As Brusaw concluded, you could put anything in such a case, which he did. The electrical engineer built a 3.5m2 slab, or 'Solar Road Panel', that contains photovoltaic cells, heating elements, light emitting diodes, microprocessors and sensors. To boost green credentials, he intends to fabricate the panel's support structure from plastics recovered from landfill.
Brusaw also believes the road could re-charge electric vehicles. As he asserts, the Solar Roadway will carry electricity so vehicles could be recharged at any convenient stop. Outlandish? Yes. Implausible? Maybe not.
In August 2009, the company won a $100,000 grant from the US Department of Transportation to construct a prototype road panel. Satisfactorily built, Brusaw is now awaiting further public funding to install several panels into car parks, to 'learn lessons' from slow-moving vehicles.
Two questions have to be asked; how much power would a solar road generate and how much will it cost? Brusaw's calculations indicate that one mile of a four-lane highway would require 1,760 panels and could generate 13.376MWh daily, providing electricity to 428 US homes. And while the target price of a single panel is $10,000, Brusaw argues this is getting close to the asphalt equivalent as his solar road will last 20 years compared to the seven years expected of an asphalt road, and generates revenue-earning electricity.
Brusaw isn't alone in his passion for solar roads. In October 2010, out of 3,795 ideas submitted to the GE Ecomagination Challenge – in which 'inventors' submit ideas on how to build the next-generation power grid – the Solar Roadway concept earned the most public votes, winning a $50,000 slice of the total $200m award.
The fresh concept of a Solar Road has garnered significant attention but enough funding to build Brusaw’s asphalt-free highway has yet to be identified. How soon will we see these solar road panels in the northern states? As Ms. Pool says “You'll probably be burning your feet on the black stuff for some time yet.”

By K.B. Elliott
K. B. Elliott is a freelance writer for Engineer-Jobs.com. Working many related positions in the Detroit area for over 30 years gives him a unique perspective on the process. To read more of his blogs, please go to Engineer-Jobsblog.com, and be sure to check out the postings for jobs in nearly any industry at Nexxt

Are you ready for that next job as a Professional Engineer? Find your niche position at Engineer-Jobs.com .