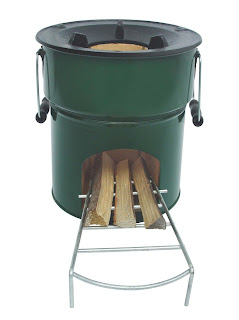 by Alex A. Kecskes
Almost half the world still cooks its food with wood and charcoal. The fires they use result in deforestation and black carbon, which contributes to global warming and smoke-related diseases that kill an estimated 1.6 million people annually.
Researchers in Oregon are working on a solution to this global problem. They're perfecting stoves that use minimal amounts of wood, release little smoke, and are cheap enough for use by Third World populations. One such stove can cook rice for 20 people with two fistfuls of sticks, or about 90 percent less wood than traditional cooking fires need.
Housed in a 55-gallon steel drum, the stove features a well-insulated combustion chamber made of a special steel alloy that concentrates the fire from a mere few sticks of wood. Unlike an open fire, the combustion is more complete, burning the particles that usually become smoke. The hot gases are directed around the cookpot. As the water boils, the stove's metal skin and stovepipe remain only slightly warm, revealing how little heat is wasted.
Based on a 1980's design called the "rocket stove," the clean, efficient stove has served as a model for good stove design worldwide. Global researchers insist that the need for 500 or 600 million cookstoves could be satisfied with such highly efficient units. Currently, a company called Envirofit mass-produces rocket stoves in China for export to rural India. Another company called StoveTec makes consumer versions of the rocket stove in China.
For an additional perspective, check out this video:
Alex A. Kecskes has written hundreds of published articles on health/fitness, "green" issues, TV/film entertainment, restaurant reviews and many other topics. As a former Andy/Belding/One Show ad agency copywriter, he also writes web content, ads, brochures, sales letters, mailers and scripts for national B2B and B2C clients. Please see more of his blogs and view additional job postings on Nexxt.