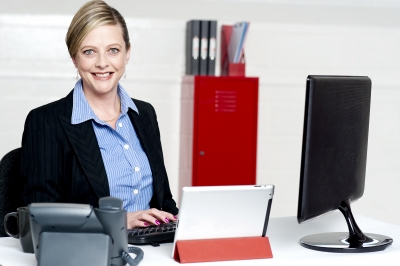 An administrative assistant's job does not end with clerical duties. As companies become more technologically advanced, the admin's role must also expand to include technical responsibilities, such as maintaining a company's social media pages and online profile or adding new content to the company's website. Twenty-two percent of respondents said that they list "Social Media Manager" as one of their responsibilities. Admins are taking on more financial responsibility, too; 47 percent of surveyed admins stated they are responsible for their company's budget and payroll, and 45 percent reported their duties included human resource functions.

Administrative assistants are a hardworking bunch. Forty-four percent of survey respondents stated their workloads increased in the past year, while another 16 percent reported a substantial workload increase. This could be due to a variety of reasons, but the main point is that an admin is indispensable to an organization, so in the face of company downsizing or reorganization, the administrative assistant often takes the brunt of the new workload. The good news is that an overwhelming majority of people claim their admins are highly appreciated, and admins agree, as 79 percent of administrative assistants surveyed stated they feel appreciated by their employers.

An administrative assistant's job can be quite challenging at times due to the dynamic nature of the role. However, many find that they enjoy its challenges, as no two days are ever alike and boredom is rare. Performing well as an administrative assistant means being highly organized, adept at written and verbal communication, technologically savvy, highly flexible and a critical thinker.

Black administrators are too rare at the top ranks of higher educat...
blog post from Inside Higher Ed | News