Following Your Passion and Reclaiming Your Soul - Without Ruining Your Life 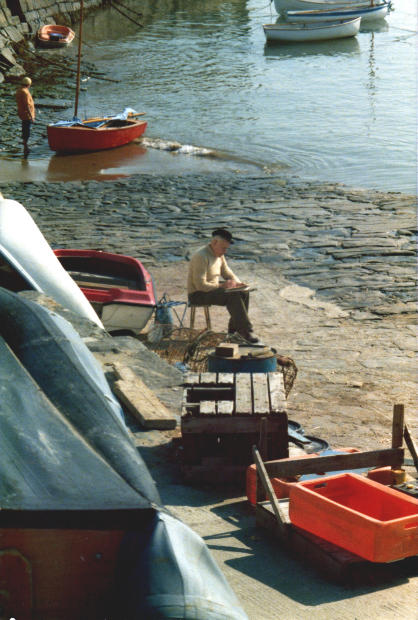 Deciding when to make a career change can be really difficult. Depending on where you're at in your career, it can feel like you're a contestant on “Let's Make a Deal.” Should you give up what you have in your hand, even if it isn't really what you want, and try for what's behind one of the curtains? Behind one of them there is the potential for supreme happiness and job satisfaction, behind another is the looming specter of unemployment and the other curtain is hiding a job that is almost as miserable as the one you have, only that one job has a boss that is overbearing and obnoxious. What do you do?

For many people who have lost their jobs due to business closings, lay offs and corporate downsizing, the choice is a no-brainer. They are out of work and they have nothing to lose. Especially if they've been having trouble finding a job in their current field, this is the perfect time to try something new.

But, what about the person who is not only lucky enough to have a job in this economy, but actually has a job that treats him extremely well and pays a salary that is more than generous? Even though he strongly believes that his job is slowing eating away at his will to live, is it worth trying to change career fields?

This is the exact position that one of my dear friends is in. As a creative person, initially he entered the workforce with the aspiration of becoming a comic book creator. He is an accomplished artist and an excellent writer. After getting an undergraduate degree in Fine Arts, he began working with a small comic book publisher. He reached his goal of producing a book of his own, but the work was extremely intense and the pay was less than desirable. Artists, even published ones, rarely do better than just barely not starving. In an attempt to further his career prospects and earning power, he made the decision to attend graduate school and focus on advertising. While perusing his degree, he realized that he had a natural knack for the industry. Shortly after graduation, he landed a job with an agency and has been very happy with how they treat him. He earns an extremely generous salary, has liberal vacation and leave time, great benefits and job security. It sounds like a dream job, right?

Well, maybe not so much. When he was younger, success meant having a big paycheck, an impressive title and being able to brag about what you do for a living. It's just a generational thing. In his twenties and even into his early thirties, his career path was all about proving himself, both to his parents and to himself. His ambition took him far and by any standards, he's reached his idea of success. However, as an artist, what he does everyday is slowly stealing his soul, just a little every day. You see, in spite of everything he has accomplished, inside of him is still the person who wanted to be an artist, even though the career options aren't so good. He wanted to create something, to express himself in a way that feels right, and as much as he wants it to be, advertising simply isn't it.

Finding the right job is very much like dating, and when you finally settle down with a career and a company, it's sort of like a marriage. These days, people don't stay at their jobs for 30 years or more, and sadly, they don't stay at their marriages that long either. More and more, we feel have bought into the idea that we deserve to get everything we want and when things don't turn out that way, it's not difficult to walk away. For my friend, however, the idea of walking away from his job in order to pursue his own artistic ideas seems, to a logical person and even to him, to be a really bad idea. Why would you want to give up a great paycheck, job security and flexibility? On the other hand, what is the cost of staying? Are all of those benefits worth turning your back on your passion and sacrificing a large part of your creative soul? If you're miserable, is it really worth staying?

The truth of the matter is that only a person in this situation can weigh the pros and cons and make the decision. However, there are some ways that you can try out a new career field without having to walk away from your current job. For anyone who is on the fence about a career change, maybe it doesn't have to be all or nothing. Maybe there's a way to have both, or at least test the waters before making a decision. Here are a few ideas:

Try having a hobby or working on a project in your spare time – Depending on the career you want, maybe there's a way to adapt it into a hobby. For example, if you really want to be a mechanic or a race car driver, maybe you can work on restoring cars in your garage or spend your weekends at the race track. Even if you have to cut back your work hours or find other ways to compromise your time, it could be better than making a complete switch.

Discuss taking a leave of absence – If you have a great job, like my friend does, it might be worth discussing a leave of absence with your boss. Often, they will keep your job open for you for a preset amount of time. You can use this time to explore your options and work on your artistic projects.

Build a large safety net before you go – Don't wait until you can't take your job even a day longer. When you first begin to realize that you aren't happy, start saving money. It's a sad truth that without money, you aren't going to have actual freedom. If you have a large safety net, you will have the freedom to do things like take an unpaid internship or go back to school. Develop a plan, invest your money and build your own security before you throw in the towel.

Ultimately, when it comes to changing careers, you really have to trust your gut. Life is too short to be unhappy for a good portion of it.

Have you ever had to make a tough choice about changing careers? Please share your thoughts in the comments.