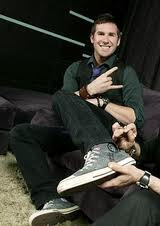 There are some pretty plum jobs to be had in the hospitality industry. One of those is Vibe Manager at the Hard Rock Hotel in San Diego. Currently held by John Resnick, the job is "probably the coolest mission ever" as John put it.

A graduate of Cornell University's prestigious hospitality program, Resnick pulls out all the stops when it comes to partying. He manages all the music in the hotel's 54 "music zones," from the lobby to the spa. And he makes sure you're greeted by a customized playlist in your hotel room. When the sun sets, Resnick keeps things moving on the dance floor, in the Saloon, ( a "Kid Rock-meets-Gucci" nightclub), and Moon, the rooftop bar and lounge.

During the day, Resnick often conducts impromptu tours of the famous Hard Rock art and memorabilia collection. Among the tour's highlights are a letter from Paul McCartney to a friend after his wife died and Stevie Ray Vaughn's guitar. He sometimes offers DJ lessons for group meetings and individual guests.

To make sure he's current on the latest happenings in music, Resnick attends major music showcases. He also follows local bands. Resnick adheres to the Hard Rock's motto: "Love all--serve all, take time to be kind, all is one, and save the planet."

I've attended a few celebrity press junkets at the Hard Rock and I can tell you that the party is non-stop (see my Hard Rock review).