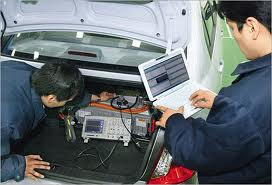 by Alex A. Kecskes
As the competition for better electric vehicles grows, automakers are looking to a whole new breed of engineers—young professionals trained and skilled in mechatronics, computer systems, wireless technology and controls engineering.
To meet the demand, Ford is recruiting salaried engineers with specialties in batteries, system controls, software and energy storage. These engineers will develop electric vehicles and will be working nationwide in Detroit, Boston, Chicago, Cincinnati, Columbus, Ohio, Milwaukee, Raleigh and Durham, N.C. and San Jose, California. Ford’s engineering recruitment efforts were officially launched at the 2011 North American International Auto Show.
To ensure a steady supply of electric-savvy engineers, Ford has teamed up with the University of Detroit Mercy (UDM) to create a new graduate-level curriculum. Graduates of the program will support Ford’s plans to roll out increasingly sophisticated hybrids, plug-in hybrids and pure battery electric vehicles. They include:
If you’re an aspiring automotive engineer, you might consider applying for a program like Ford’s. The automotive landscape is rapidly changing as the country—and the world—turns to developing the next generation of electric and hybrid vehicles. The simple truth is, you’ll have to know more than internal combustion engines, steering and brakes. You’ll need to be well versed in battery cells and electrochemistry, power-split controls and regenerative braking.
Tomorrow’s motor vehicles will be filled with more technology than Henry Ford ever imagined. And cars will be more individualized to meet a specific driver’s needs and desires.
For an added perspective, check out this video:
Alex A. Kecskes has written hundreds of published articles on health/fitness, "green" issues, TV/film entertainment, restaurant reviews and many other topics. As a former Andy/Belding/One Show ad agency copywriter, he also writes web content, ads, brochures, sales letters, mailers and scripts for national B2B and B2C clients. Please see more of his blogs and view additional job postings on Beyond.com.