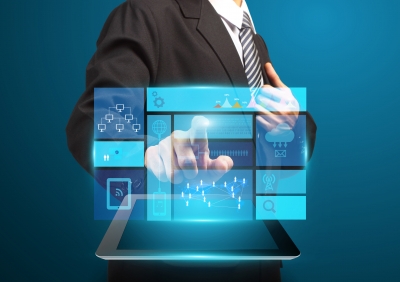 When Microsoft first demonstrated its new Windows 10 operating system, it debuted brand new wearable technology called Windows Holographic. This hardware and software detects body motions relative to displays on special glasses you wear on your head. The results of this new technology can revolutionize computing, entertainment and engineering.

The device allows users to design holograms in the virtual space in front of them as images display on the lenses, explains TechNewsWorld. Combined with the program HoloStudio, Windows Holographic can share the holograms with others and even print them on a 3-D printer. The wearable technology interprets people's gestures and voices to manipulate data directly in front of them. You do not need a screen or even a physical keyboard.

Windows Holographic links to any Windows 10-enabled device, such as laptops, tablet computers and printers. The computer exists in a set of goggles that wraps around the head and projects images onto lenses in front. Vents shunt heat to prevent the computer from overheating. The headset contains advanced sensors, three processors and holographic lenses. Attendees of the Microsoft event called this holographic technology a "game changer" and a "fundamental" change in the way humans use computers.

The three processors run through terabytes of information in real time to handle all of the input. The headset contains no wires, external cameras or clunky gloves like virtual-reality devices of the 1990s. Windows Holographic and the goggles run separately from any other devices, yet the headset can link to other computers to download designs and share them.

The technology seems similar to Hollywood special effects seen in the "Iron Man" movies and "Minority Report," which show the main characters moving visual representations of data with their hands, arms and fingers in mid-air. These movies did not use headsets to see visual objects, but the basic movements are similar. The new Windows Holographic technology is a more advanced version of the Xbox Kinect video game system.

Imagine creating an electric car simply by assembling virtual parts while looking toward an empty space on the floor in front of you. Holographic glasses could help monitor vital signs, locate missing people and make simple phone calls. Take the technology even further to perform delicate medical procedures with the precision of a computer by tapping the air in front of you. Revolutionize the video game industry by designing a race game that lets you steer a virtual wheel, press an accelerator pedal and even look to competitors to either side of you with real-time movements. All of this happens without attached wires getting in the way.

This new system advances wearable devices that have made headlines for two years. Sales of wearable tech such as glasses, watches and bracelets are expected to top 19 million units by 2016. Cellphones, fitness equipment and productivity tracking devices have already hit the wearable tech market. These gadgets will get faster, smaller and better in coming years.

Windows Holographic marks a turn in the computer industry, and designers have been working on the wearable glasses for five years. If the demo version is an indication, Microsoft may have a gold mine for the next decade as humans become more mobile with computers.

Photo courtesy of KROMKRATHOG at FreeDigitalPhotos.net