How they Straightened up the Sunken Cruise Liner in Italy 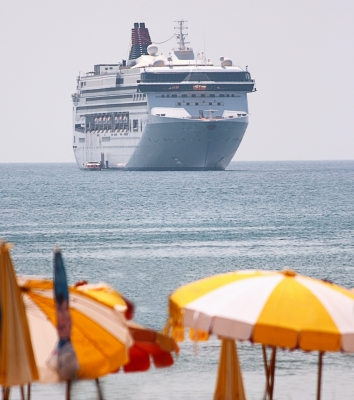 On January 13, 2012, the 114,000-ton cruise ship, Costa Concordia, ran aground on the rocks off the coast of the Italian island of Giglio. The liner was owned and operated by Carnival Cruise Lines and hosted a number of environmental engineering jobs associated with its on-board laboratory and pollution monitoring station. At the time of the wreck, the ship had over 4,200 people on board, of whom thirty-two were killed when it listed to starboard and partially flooded. All but two of the bodies were recovered quickly, but the vessel has remained wedged against the rocks and flooded since the disaster. The entire time it's been disabled, the laboratory has been believed to be leaking hazardous materials. These facts form the background to one of the most stunning engineering jobs in living memory: the refloating of the wreck.

Ordinarily, a hulk of the size of the Costa Concordia would not have been a candidate for refloating—or parbuckling—but would have been broken up in place with what remained of the hull towed away. The hazardous materials and likelihood of finding bodies, however, as well as the shallowness of the water, made it necessary to parbuckle the ship upright before towing it away for salvage.

The engineering jobs involved were huge. No fewer than five hundred people from twenty-five countries were called on to maneuver the ship upright. The first step was preparation. One of the first engineering jobs to be done was the emplacement of underwater scaffolding in the 98-foot-deep water. This scaffolding was intended to support the weight of the ship after the rotation but before it could be sealed and made seaworthy.

Perhaps the most painstaking of the engineering jobs involved attaching an elaborate network of pulleys and cables to brace the ship for its initial rotation. The next step was to pull it no fewer than twenty-five degrees toward true before the final engineering jobs of the process—flooding giant steel boxes attached to the port side to provide ballast—could be undertaken.

The lift, which began around 9 o'clock in the morning on Monday, September 16, 2013, lasted until after midnight and was a total success. While the engineering jobs were on hold as a result of local thunderstorms, the only challenge during the maneuver was that one of the cables was hanging slack and needed tightening. That accomplished, the rest of the tasks came off without a hitch.

The parbuckling of the Costa Concordia was one of the biggest, and most successful, engineering feats in recent history. With months of preparation, a huge staff of dedicated engineers, and plenty of logistical support, the ship was recovered and will soon head off to the wrecking yard without causing any more damage. While the engineering jobs involved in the lift were complex and demanding, the results couldn't have been better.