How to Sell Your Boss on the Idea of Telecommuting 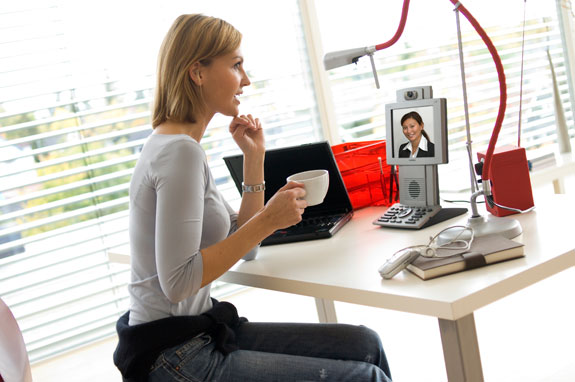 Fed up sitting in traffic burning $4.50 a gallon gas every day? Had it up to here with office politics and being stuffed in ever-shrinking cubicles?  Tired of being corralled on Fridays at 5 p.m. by the boss who wants you to stay late for that "must have" TPS report? Take heart, for there is hope.

BusinessInsider.com notes that telecommuting is becoming more of a business model and less a last resort solution. Remote work has taken on the mantle of respectability, especially for road warriors, and employees who accomplish more after hours than in the  8 to 12 hours they’re stuck in the office. In 2012, the feeling among many employers is not why they should adopt telecommuting, but the ways and means to implement it.
Many boomers are big advocates of telecommuting. They’ve topped out salary and promotion wise and are eager to adopt a more balanced approach to working and living. They’re looking toward retirement and getting out of the daily commute rat race. AARP research reveals that 70 percent are seeking to mold work to fit their lifestyle needs. Telecommuting allows them that flexibility.
So how can you shift gears and start telecommuting? You simply have to convince your boss to let you work at home. The persuasion begins thus:
You will be more productive. If you've tried this tactic before, you need to back it up with some solid stats. A recent survey by Computing Technology Industry Association had two-thirds of respondents indicating that their organizations were more productive due to part-time and full-time telecommuting. American Express noted that its telecommuters produce 43 percent more business than in office workers. Finally, a survey by the Massachusetts Division of Energy Resources and the Massachusetts Highway Department noted nearly 100 percent of supervisors reported higher levels of productivity for their telecommuters.
Office space isn't getting any cheaper. Working at home means companies and departments can save on office space, furniture, supplies, and parking space. This cuts their overhead in these tough economic times.
Fewer interruptions, more billable hours. If you bill clients directly, you'll be able to spend more time on client work and less time being interrupted by phones, people jawboning in your office, meetings that don't impact you directly and other "time eaters."

It's a trend that catching on. A recent Robert Half Technology surveyed of 1,400 CIOs found that nearly half offered flex-work schedules--including telecommuting--to boost job satisfaction.  In addition, over 12.4 million U.S. workers telecommute at least one day a month. Tracey Wilen-Daugenti, author of upcoming book "Society 3.0: How Technology Is Reshaping Education, Work and Society," notes that telecommuting is up 400 percent, and by 2015, there will be 14 million freelancers.
The trend toward telecommuting is on. Now it’s up to you to sell the idea to your boss.