I Scream for Ice Cream Innovation! 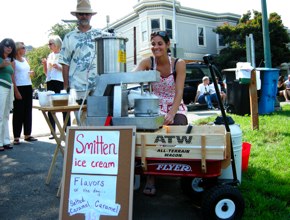 One thing I encourage all job hunters to do is to take a look and see if it’s a job is that they really need or if it’s an idea. The best way to bolster a country facing a struggling economy is through small business. There are plenty of people out there looking for a new boss that just need the right inspiration that will turn them into their own boss, and create jobs for others as well.

Robyn Sue Goldman had one of those game changing ideas.  “I wanted to re-invent old-fashioned ice cream without all the preservatives and stabilizers you get in regular ice cream,” Goldman thought before she invested 2 years and her life savings working with an engineer to come up with a patented machine named Kelvin. She calls it that because it uses liquid nitrogen to mix and cool fresh local ingredients to 76 degrees Kelvin or -320degrees F. The result is all natural gourmet ice cream on the spot in 60 seconds or less.

To get her business going, Goldman took it to the streets. Her now-husband helped her modify a Radio-Flyer wagon to cart Kelvin around the financial district of San Francisco. They outfitted the classic red metal body with all-terrain wheels and a homemade battery pack that would last 3 hours thus Smitten Ice Cream was born.

After that Robyn Sue teamed up with pastry chef Robyn Lyn Lenzi as well as chef and lawyer Andrew Shaw. The fusion of technology and taste was sweet success and they opened their first store in May 2011. But Smitten isn’t just a revolutionary ice cream parlor it’s also part of a new approach to housing businesses called the Proxy Project.

One of several vendors to participate, Smitten operated out of a refurbished shipping container that was customized off-site and delivered ready to plug-in to utilities at a vacant lot turned shopping district. The container is economically and environmentally friendly using LED lighting and other energy saving technology.

If the project doesn’t perform to expectations after a four year lease on the lot the city can easily remove the entire operation. Judging by the success they’ve found as they celebrate their first anniversary in the shop that’s not likely to happen. Smitten ice cream and other vendors like eateries, retail spaces, an art gallery and a beer garden are helping the Proxy Project create an eclectic artisan district in a space that used to be a freeway.

When asked what’s next, Goldman keeps her cool. Smitten isn’t trying to grow too quickly. They are focusing on perfecting their recipes both for ice cream and for business before branching out in order to keep everything Smitten owned.

From one idea and the passion to pursue it, Goldman is making a difference in the economic and physical health of her community. Don’t be so quick to dismiss your brilliant ideas or be too busy to follow your dreams.