Is Financial Infidelity Ruining Your Relationship? You're Not Alone 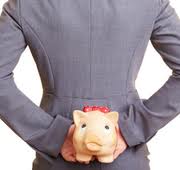 Do you tell your spouse or significant other about all of your financial decisions? Do you hide large purchases or bills from them? If so, you aren't alone. In a recent report from Rueters, it seems that three out of ten Americans commit “Financial Infidelity”. That number includes those who don't tell or are dishonest about a job loss or about the status of their job search.
The online poll was conducted by Harris Interactive and it asked 2,019 adults, who have combined their finances with their partners, questions about their financial truthfulness. They asked them about issues like hiding cash, hiding bank accounts or lying about debt. Forbes commissioned the survey along with the National Endowment for Financial Educations, to get a better idea about the state of personal finance in our country.
According to the survey, one-third of the people polled said that they have been deceived and the data indicates that both sexes lie about their finances equally. Not only that, but these sorts of lies can cause serious damage to their relationships. Sixteen percent of the people who were affected by this sort of deception have said that it caused them to file for divorce. Eleven percent said that they were separated from their partner because of the lies. But, for the larger portion of the respondents, the deception led to a serious argument and had lessened the trust they had for their partner.
The most frequent lie, the survey found, was hiding cash. 58% of people said that they have cash hidden away that they haven't told their partners about. Here is how the lies stacked up:
This type of infidelity seems to be almost as devastating as actually being physically unfaithful. From the feeling of betrayal to the actual consequences of divorce, not being honest about finances seems to have some serious repercussions. So, it made me wonder why so many people don't trust their partners to tell them the truth about these matters. Is it simply that combining fiances causes too many restrictions that make the couple feel the need to lie in order to have the things they want? Could there be a solution that works, like keeping separate checking accounts that contain a small amount so each partner has some discretionary money? It would be interesting to find out how this problem could be avoided so that couples could prevent having this sort of problems in their marriages.
What do you think about financial infidelity? Are there some ideas that have worked for you? I would love to hear your thoughts in the comments.
Are you looking for a job in the Finance industry? Be sure to visit FinancialJobBank.
By Melissa Kennedy- Melissa is a 9 year blog veteran and a freelance writer for FinancialJobBankBlog, along with helping others find the job of their dreams, she enjoys computer geekery, raising a teenager, supporting her local library, writing about herself in the third person and working on her next novel.