Is Obamacare Here to Stay? 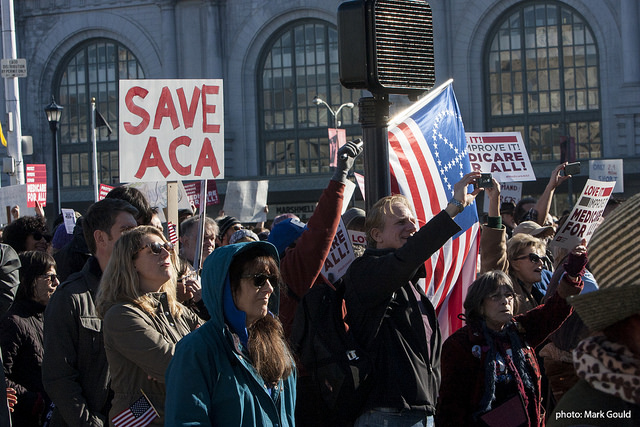 President Trump's plan to repeal Obamacare was a major selling point of his campaign, and the Republican party now faces intense pressure to deliver on this promise. Although health care reform has long been a source of deep division, recent approval ratings suggest many Americans prefer current laws to an uncertain future.

Less than two weeks after Trump's inauguration, a joint survey by Morning Consult and POLITICO showed a 6 percent increase in public approval of the Affordable Care Act. Ratings rose from 41 percent in early January 2017 to 47 percent near the end of the month, mirroring the tremendous spike in ACA enrollment in the wake of Trump's shaky election victory. Support climbed 13 percent among voters who believe the country is on the wrong track and 11 percent among voters earning between $50,000 and $100,000 per year.

Unsurprisingly, millions of people have questioned efforts to repeal Obamacare because they're concerned about losing essential health care before a viable replacement plan takes effect. The current health care system serves roughly 20 million people, and overturning it could lead to massive coverage loss among young, female, urban, elderly, middle class and low-income populations. Health care professionals, insurers and pharmaceutical companies are also wary of rapid market destabilization if proponents repeal Obamacare too swiftly, which could further harm the public if providers go out of business, dramatically raise rates or narrow their markets.

In his first act to repeal Obamacare, President Trump signed an executive order urging relevant federal agencies to use whatever power they have to support a free market and grant more authority and flexibility to individual states. The order also advises government agencies to "minimize the unwarranted economic and regulatory burdens" of Obamacare by waiving or delaying any measures that could cause fiscal hardship for a state. Meanwhile, the Republican majority in Congress is hoping a budget reconciliation bill can expedite the repeal, making it easier to change laws allocating funding to ACA programs. The process involves voting on directives to reorganize revenue, spending and the debt limit, satisfying a proposed budget adjustment.

Supporters of existing health care laws shouldn't panic yet. Even lawmakers who want to repeal Obamacare are markedly divided on how to replace it. Proponents of change want to avoid leaving vast populations in worse conditions than before, while eliminating tax penalties for the public and reducing marketplace subsidies are immediate priorities. To allow more transition time, some lawmakers have proposed a delay tactic that could postpone the repeal from taking effect for two to three years — an action many Trump supporters may find disappointing.

Waning confidence and uncertainty about what comes next may be key reasons for the recent increase in pro-Obamacare sentiments. However, Paul Ginsburg, director of the Center for Health Policy at Brookings Institution, also believes the fierce media attention surrounding the issue is having the unexpected but beneficial effect of motivating more Americans to educate themselves about the Affordable Care Act.

The new administration is discovering there's no fast or easy way to undo years of legislation. Whether opponents ultimately choose to reform or repeal Obamacare, the process could become a long and messy battle with damaging losses on both sides.

You Can Now Mail Your Ashes To GOP Lawmakers Who Voted To Repeal Ob...
news via Refinery29