Is a Treadmill Desk for You? 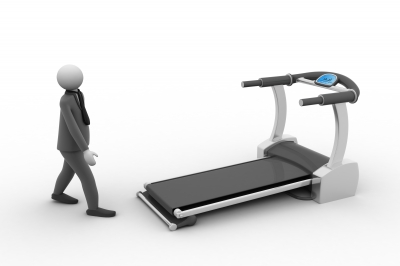 Staying active offers many benefits, but you may find it difficult to get enough exercise while stuck at a desk almost every day of the week. Some desk-bound workers are now using treadmill desks — treadmills with work surfaces attached to them — to get some much-needed exercise without ignoring critical tasks. Although several research studies have explored the physical benefits of treadmill desks, their potential impact on workplace productivity still isn't clear.

A new study by researchers at Brigham Young University shows that the use of treadmill desks may hamper workplace productivity and make it difficult for workers to concentrate. The researchers split the study participants into two groups: members of one group sat in chairs while performing cognitive tasks, and members of the second group used treadmill desks while engaging in the same activities. Participants were asked to complete several tests designed to assess their manual dexterity and mental abilities.

The participants were asked to recall lists of words, type on their computers and add numbers in their heads, among other activities. At the end of the study, the people who sat down while performing the cognitive tasks performed better than those who used treadmill desks. Because the people who used these desks had to shift some of their concentration to maintain their balance and stay upright, they weren't able to focus completely on the other tasks.

Although the results of this study are troubling, don't assume that treadmill desks are automatically a bad thing. Michael Larson, the lead investigator, said the study was only a one-time test of performance. None of the participants had ever worked at a computer while walking on a treadmill, so they had very little time to adjust. Larson says it is likely that workers who use treadmill desks regularly become accustomed to them, making it possible to maintain a high level of productivity and accuracy while staying active.

If you are thinking about using treadmill desks in your workplace, don't worry too much about a loss of productivity. The participants in the study set their treadmills to 1.5 miles per hour while taking several cognitive tests. If you have trouble thinking or typing while walking at this speed, you can always reduce the speed of your treadmill. You can also adjust the incline so you don't have to exert as much physical energy while you are concentrating on typing or performing tasks requiring of mental dexterity.

Although there is little research on how treadmill desks affect productivity, the physical benefits likely outweigh the potential for a small decline in output. If your employees are having trouble using their treadmill desks effectively, make adjustments on a case-by-case basis. You should be able to eliminate productivity-related problems without forcing people to stay in their chairs all day long.