It’s a Funny Thing about Flowers 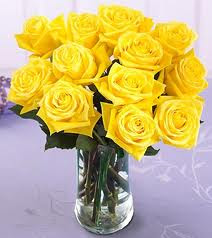 There is a true story of a factory worker, named Dan, who found it difficult to express his feelings of love for his wife, Elizabeth. He so appreciated how she took care of their son, Jason, and kept the house clean, cooked the meals, worked fulltime, and was so darn positive, upbeat and loving.

Finally, one day on his way home from work, he mustered up enough courage to stop at a local florist, and pick up a bouquet of yellow roses. Feeling somewhat self conscious, he didn’t even want a card included. Upon arriving home, he observed his wife at the kitchen sink peeling potatoes for dinner. She turned around and there he stood with the roses in hand. Being quite shy, he awkwardly handed her the flowers with a curt, “These are for you.” He hurried out of the kitchen and into the living room, where he turned on the television set and buried his head in the newspaper.

A few minutes later their seven year old son, Jason, came in the back door. As the door slammed shut, he ran into the kitchen and you could hear his tennis shoes screech to a halt. His eyes grew wide as he saw the stunning bouquet of yellow roses that his mother had put into a beautiful flower vase and onto the kitchen table.

He immediately asked, “Hey Mom, where did those flowers come from?” His mother wiping away a few tears from her eyes, replied, “Your father bought them for us.” Johnny asked, “It isn’t your birthday, why did he buy them?” His mom said in an emotionally wavering voice, “Oh honey, it’s just your Dad’s way of saying that he loves us!”

Hearing the television in the living room, little Jason, knew right where to find his father. He made a beeline into the room, where Dan had pulled the newspaper up even higher, so as not to have eye contact with his son. That didn’t stop Jason as he burst through the newspaper, and threw both of his arms around his Dad’s neck and cried out, “Daddy, Daddy we love you too!” That day, Dan and his family, grew a little closer to each other because he had found the courage to express his true feelings.

How about you, in your life? Are there some members of your family to whom you need to express your love? What are you waiting for? It is up to you.

Tom Borg is president of Tom Borg Consulting, LLC. He is a business consultant, speaker, coach and author. He helps companies and organization become more profitable by increasing their value and lowering their costs through the professional development of their managers and employees. Please see more of his blogs at ConstructionJobForceblog.com and view additional job postings at Nexxt.

These Are The Best Apps For Making GIFs, Period
news via Refinery29

The Only Item Lauren Conrad Kept From Her Laguna Beach & The Hills ...
news via Refinery29