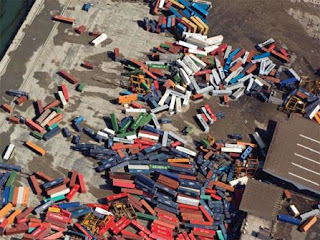 The incredible misfortune and destruction caused by a powerful earthquake and a huge tsunami back to back is something that can’t be imagined. If you are not at the center of it, you cannot understand it.
Keeping any business running in such a disaster is unthinkable. Rebuilding and running commerce that requires international logistics may seem impossible.
However, as I said in my last post, we all have a lot we can learn from our undaunted trade partners in the hard hit country of Japan. They are providing an example of resiliency to the world, and they started it all before the ground stopped shaking!
Japan has evolved into an economic heavyweight and created a highly developed logistics system in spite of challenging geographic conditions. On one hand, such a system is necessary to offset the Japanese islands lack of raw materials. On the other hand, it is the foundation for expanding the positive growth of the export nation. Air transport, in particular, plays an important role there.
The most important means of transport for freight inside of Japan are road transports and coastal shipping. Some of these routes were repaired in as little as six days. Others are yet to be located under the rubble. The logistics market in Japan has recently opened up to international service providers. Just about all international companies in the sector, including DHL, Schenker, UPS and FedEx, have invested in their Japanese networks in recent years.
But what if some of the existing players balk at the restoration progress? According to Reuters - German shipping companies are avoiding Tokyo Bay area ports due to radiation fears and Japan could face severe supply chain bottlenecks as vessels get diverted to the limited ports hosting rescue supply efforts.
Fuel shortages, as well as the damage to transport infrastructure and fears of a serious nuclear disaster involving nuclear plants, have hampered relief and recovery efforts in the worst-hit Tohoku region. A tanker arrived at the Port of Hachinohe in Aomori Prefecture, northeastern Japan, on Wednesday, carrying 380 tons of propane gas from Chiba City. A Tokyo-based Shinwa Chemical Tanker, became the first tanker to make a call at the port since the earthquake and tsunami. Other tankers carrying gasoline, diesel oil and kerosene have arrived at Sendai-Shiogama in Miyagi Prefecture since Monday to be unloaded at Idemitsu Kosan's storage facility there. A ship carrying equipment and materials used for recovery work arrived at Sendai-Shiogama on Wednesday. Kuribayashi Steamship said it plans to continue transporting relief supplies from the Port of Tokyo to the Port of Sendai-Shiogama three to four times a week.
Up to 40 percent of Japan's container traffic could be affected if the risk of nuclear radiation forces the closure of ports in Tokyo Bay, according to Alphaliner. Japanese authorities began testing for radiation in sea water on March 22 near the Fukushima plant 150 miles north of Tokyo.
Is the word “impaired” strong enough? Is the word “repaired” one that is still far in the future? The world is watching and the Japanese people will make this work. Help where you can, redirect if you have to, but stay tuned. When complete, I know the systems will be stronger and more efficient than ever!

You can do this!
By K.B. Elliott
K. B. Elliott is a freelance writer for LogisticsJobSite.com. Working various logistical positions in the Detroit area for over 30 years gives him a unique perspective on the process. To read more of his blogs, please go to LogisticsJobSiteblog.com, and be sure to check out the postings for jobs in nearly any industry at Nexxt.
Ready to find that next position as an experienced Logistics Professional? Find your dream job at: LogisticsJobSite.com