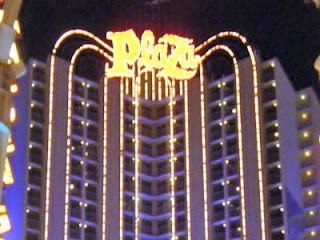 by Alex A. Kecskes
Yes, times are tough, particularly in some sectors of the hospitality industry. And Las Vegas is no exception. There are a few bright spots, however.
If you’re looking for a hospitality job in Las Vegas, you might want to head over to the newly renovated Plaza Hotel and Casino. They’ve been hosting a job fair that began on June 27th, running through to July 8th. You can apply from 9 a.m. to 4 p.m.
The Plaza “minimized operations” last September for a $35-million renovation of the 40-year-old property. The Plaza has been an iconic hotel in Downtown Las Vegas for the past four decades. The recent renovation gave a facelift to the Plaza’s casino, restaurants and more than 1,000 hotel rooms. Firefly, a tapas restaurant formerly located in the glass dome overlooking Fremont Street will not be returning to the Plaza.
To staff up for its grand reopening in September, the Plaza will be hiring over 800 employees. That’s nearly twice as many employees as it laid off when the hotel temporarily closed last year. The 800 employees will include about 300 returning staff. Positions open at the Plaza include both entry and management-level jobs in the gaming, hotel, food and beverage, and marketing departments. Prior to its grand reopening, the Plaza will host a soft opening on August 24th for its casino.
The Plaza’s job fair will be held at the Las Vegas Club, across Main Street from the Plaza. Interested applicants should go to the Plaza’s website to apply.
Remember, when going to a job fair, dress to impress and have several copies of your resume on hand. Practice the answers to the most common interview questions. The interviews at these fairs will be short and to the point. Finally, do some digging into the Plaza’s corporate structure and management team. Remember: success is when preparation meets opportunity.
Alex A. Kecskes has written hundreds of published articles on health/fitness, "green" issues, TV/film entertainment, restaurant reviews and many other topics. As a former Andy/Belding/One Show ad agency copywriter, he also writes web content, ads, brochures, sales letters, mailers and scripts for national B2B and B2C clients. Please see more of his blogs and view additional job postings on Nexxt.