Key Hospitality Job: Preparing for a Visit by the U.S. President 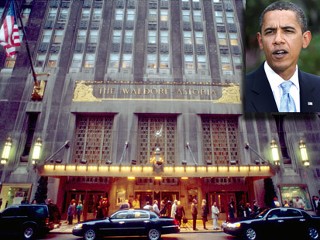 There are hotel jobs and there are hotel jobs. Perhaps the most challenging is that of the hotel manager and staff who must prepare for a visit by the POTUS—the President Of The United States. As exciting as it sounds to host the Chief Executive of the most powerful nation on earth, it can be a most trying time for you and your staff.

As hotel manger, you’ll be expected to be on-call for any and all presidential advance teams--both social and security. Every detail must be checked and double checked.  This includes ways and means to limit and control visitor access as specified by each advance team.
The object of a presidential visit is to free up the POTUS and allow him to do the things he likes to do and must do. When President Obama stays at New York’s Waldorf-Astoria, for example, he takes over three presidential suites, which consists of a four-bedroom unit on the hotel’s 35th floor. U.S. presidents often stay there for a variety of reasons. For one, button-for-button, the telephones are set up to match those in the White House.
Aesthetic touches that make U.S. presidents feel at home are also de rigueur. Things like personally monogrammed towels in the master bedroom and the personal desk of General Douglas MacArthur--donated by MacArthur’s window, Jean. Then there's a rocking chair used by President John F. Kennedy, a gold oval mirror and eagle-based table at the entrance, another eagle desk donated by President Jimmy Carter, and wall sconces from President Richard Nixon.
Some say, the Waldorf-Astoria remains a top presidential pick because of the hotel’s unique design. Others say it's housed in two historic buildings on Park Avenue. Those concerned with the president's safety insist that the hotel offers certain practical and security-minded advantages. For example, the Waldorf-Astoria is one of the few New York hotels that feature an under-the-building driveway where the Secret Service typically puts up a tent.
Special treatment is granted without question. If a president wants the suite, it is his, no matter what--even if someone else has already booked the room. The usual rate for Obama’s room is $7,000 a night. There’s also virtually no limit when it comes to food. All orders must be swiftly and graciously accommodated.  Chefs work with the U.S. State Department to determine presidential likes and dislikes. Menus for meetings or public dinners are carefully planned in advance. While there are no official food tasters in the kitchen, Secret Service staff watch as meals are prepared.
If you like working in hospitality, there’s no greater honor or challenge that preparing for a presidential visit.