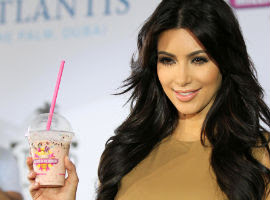 by Alex A. Kecskes
Ever wonder where Kim Kardashian likes to vacation? Would you take a hospitality job that caters to such celebs--just to chat with the star of Keeping up with the Kardashians?
Kim’s recent attendance at the 40th birthday bash of Indian-American hotelier Vikram Chatwal might serve as a clue to where the star may next vacation. She has set her sights on a trip to India, where the TV reality star is fanatically admired.
Kim noted that she loves Indian fashion and clothes, especially outfits worn by her part-Indian designer and BFF, Rachel Roy. She indicated that she would like to visit the country to get inspired and look for some traditional outfits. She confided that she loves all the colors, the gold, and the variety of bangles—items that are becoming increasingly popular in America. One can’t help but wonder if an Indian influence might just accent future seasons of the Kardashian Kollection, the popular clothing line inspired by Kim and her sisters Khloe and Kourtney.
Kim recently spent some much-needed downtime in exotic Dubai and other Middle East venues. She was seen riding a camel and even donned a burka—all without Kris Humphries. One of the highlights of Kim’s Dubai trip was celebrating the launch of Millions of Milkshakes in the Dubai Mall. Perambulating through the largest mall in Dubai, Kim wore a stunning Alexander McQueen dress and Christian Louboutin heels during the event’s big launch.
One can be sure that wherever Kim stays for vacation, hotel managers will be busy weeks in advance, prepping and getting everything ready, as all media eyes will also be on the hotel and its amenities.
For an added perspective, check out this video:
Got any tips on celebrity vacation haunts? Share your comments in the section below.
Alex A. Kecskes has written hundreds of published articles on health/fitness, "green" issues, TV/film entertainment, restaurant reviews and many other topics. As a former Andy/Belding/One Show ad agency copywriter, he also writes web content, ads, brochures, sales letters, mailers and scripts for national B2B and B2C clients. Please see more of his blogs and view additional job postings on Nexxt.