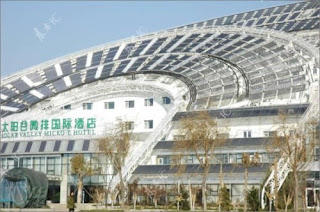 If you're planning a trip to China and want to do your part to preserve the planet's ecological balance by imposing a smaller footprint during your stay, you'll be delighted to know that luxury hotels in China are going “green," meeting or exceeding LEED (Leadership in Energy and Environmental Design) standards and leapfrogging ahead of many 5-star hotels in the U.S.

The new hotel covers 75,000 square-meters and features thousands of solar panels and solar heat pipe collectors. These collect and store enough energy to meet 70% of the hotel’s needs. The solar energy is used for a variety of functions, including heating its water and maintaining its heating and cooling systems. Integrated photovoltaics generate power and save energy, while rooftop solar cells generate power that's stored to light the lobby at night.

Featuring both indoor and outdoor solar swimming pools and fitness rooms, the Micro E has an abundance of meeting facilities. It also includes simultaneous interpretation systems that can provide services for a variety of international and domestic meetings.

I plan to visit China soon, and when I do, I'll book a few days at the Micro E—to do my part for the environment, and for bragging rights that I stayed in the largest solar-powered hotel on earth.