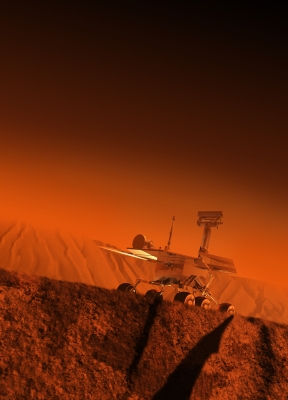 NASA's Mars Science Laboratory (MSL) probe launched from its Cape Canaveral platform on Nov. 26, 2011, bound for the red planet. The spacecraft's onboard rover, Curiosity, entered the Martian atmosphere on Aug. 5, 2012, (EDT) and landed in an ancient equatorial depression known as Gale Crater. From there, the rover traveled out to explore the alien landscape, collect samples, and take pictures of the extraterrestrial scenery.

Over the course of its first year on Mars, the rover has covered a considerable amount of ground and enabled a greater understanding of the Martian surface. Curiosity's engineering achievements—to date—include the following three milestones:

Many innovative concepts have already emerged from the data gathered by Curiosity. Professor Steven Benner, for example, recently proposed a new theory about the evolution of life on Earth. According to Benner's hypothesis, the conditions at Yellowknife Bay may have led to RNA formation via a prebiotic chemical process. If true, life potentially started as RNA on Mars and hitched an interplanetary ride to Earth aboard a Martian meteorite before evolving into DNA.

Other data, including a series of solar radiation measurements taken on the journey from Earth to Mars, will likely prove beneficial to engineers involved in the proposed Mars One mission. If successful, the privately funded mission—which is currently planned for 2023—will take four people on a one-way expedition to the planet. Engineers will need to take solar radiation levels into consideration as they design and build a spaceship capable of making the journey.

The latest rover expedition has shed new light—literally and figuratively—on the surface of Mars. As well as identifying ancient water sources, Curiosity has captured crisp imagery and navigated the terrain all by itself. The innumerable engineering marvels aboard the rover have enabled its continued exploration and may one day help human beings create a manned spaceship suitable for interplanetary travel—and a personal trip to Mars.