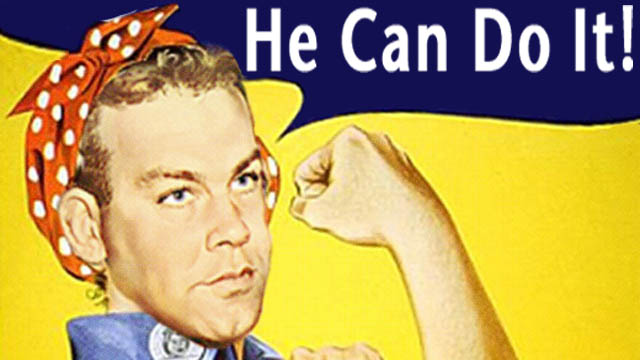 Rosy the Riveter and World War II helped encourage women to enter the workforce and created a class of “pink collar” jobs, or professions typically held by women. It was considered pink collar if more than 70% of people who held titles in a career field were women.

These gender specific workforce roles held true through the end of the millennium. After women began infiltrating male dominated professions as anything from mechanics to CEOs, men started integrating into jobs previously considered “women’s work.”

Around the year 2000 higher paying women’s professions saw more males but even entry level jobs hit an upswing of men entering the workforce when the recession started in 2007. Since then, a plethora of male personnel have found work in formerly female dominated fields.

TV shows like Melissa & Joey show this societal shift in workplace gender stereotypes. Out of work stock broker Joe Longo (played by Joey Lawrence) goes to work as a nanny for council-woman Mel Burke (Melissa Joan Hart) when her abandoned niece and nephew come to live with her. The running gag is that he prefers to be referred to as a “domestic engineer” but when asked to elaborate what that is he has to admit he’s the nanny.

If you’re contemplating crossing over into a pink collar profession consider the following opportunities to break down gender barriers:

Flight Attendant – Lots of little boys dream of flying when they grow up but not everyone is cut out to be a pilot. Flight attendants can still get air and enjoy on the job travel perks without being stuck in the cockpit.

Receptionist – The face at the front desk doesn’t have to be female anymore. Lots of men have a knack for the organizational and computer skills that come with a receptionist position.

Elementary School Teacher – It’s no longer necessary to be a woman to be a schoolmarm. Generations that grew up on Mr. Wizard and Bill Nye the Science Guy have stormed the workforce and elementary schools are finding more men applying to be teachers than before.

Legal Assistant – Law school can take a long time. More men are taking the fast track to finding employment in the field by becoming legal assistants.

Bank Teller – Managers at financial institutions are seeing a rise in the number of men hired as bank tellers. Male or female, who doesn’t want to handle all that cold hard cash on a daily basis even if they can’t keep it?

Although more men are entering these careers, they are not taking jobs away from women. Studies show pink collar professions are growing at a quicker rate than typically male and mixed gender jobs which are shrinking.