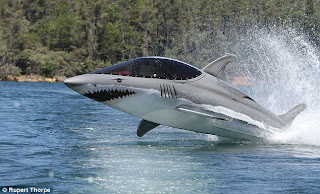 James Bond would love this: a high performance mini sub that resembles a shark. Climb in and you'll be "shaken not stirred" as you punch through waves and soar above the surface like a happy dolphin.

A company called Innespace recently unveiled the Seabreacher X, a high-speed sub that looks just like a shark with gaping jaws, menacing teeth, and that signature dorsal fin that made the movie Jaws so famous. While not as big as the Great White that turned Quint's Orca into confetti, at 16.5 feet in length, it's pretty close to a Great White. Technically not a submarine, Seabreacher is more of a cross between a plane and a boat, with improvements being continually added to allow it to perform even more "tricks"—like a 360-degree barrel roll (not recommended for the seasick prone). Watch the Seabreacher X in action.

The revolutionary watercraft can slip below ocean waves and soar effortlessly above them. Driven by a powerful 260 horsepower engine, the Seabreacher X can fly through the water at 50 miles per hour on the surface and 25 mph submerged. It can develop enough speed under water to leap 12 feet into the air, making it look like an ecstatic dolphin.

If you want a Seabreacher X of your own, you'll have to fork over about $100,000. But get in line, there's already a yearlong waiting list of eager buyers.

I can't imagine anything more exciting for an engineer that to be involved in developing truly unique products and crafts like the Seabreacher. While the economy may be down for some larger firms, smaller firms like Innespace are thriving as they cater to a very specialized market.