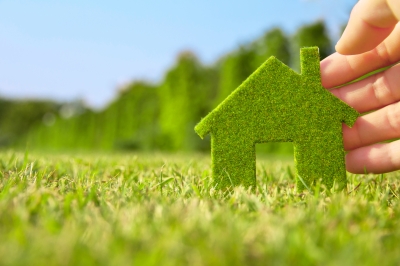 Once upon a time, the word “green” had simpler meanings. Greenhouses gave gardeners a convenient jumpstart before the beginning of the growing season, and green bathrooms were an unattractive 1970s fad. Nowadays, however, green construction techniques have adopted the word’s newer connotations, and from using recycled plastic to installing super-efficient solar cells, eco-friendly green housing schemes have radically changed traditional building methods.

Many households in the western world have already begun the transition from grid-sourced electricity to self-sufficient energy supplies. Residential property developments aren’t the only green construction projects; businesses have also begun to take part in the eco-friendly movement. Computer giant Apple, for example, recently announced plans to build a groundbreaking solar-powered manufacturing facility in Arizona. The Mesa-based sapphire-glass-production plant will run entirely on renewable energy.

Green construction is one of the most innovative industries in the world. In terms of intelligent design, it’s comparable to the IT industry, with new techniques and building materials constantly emerging. Recycling, for example, attains the status of an art form when it becomes part of green construction.

Take the John J. Makinen Bottle House, which was built in Kaleva, Michigan, in 1941. The eco-friendly building’s walls are constructed from 60,000 glass bottles, all of which are placed bottom-out and stabilized with cement. Many of the bottles came from Makinen’s Northwestern Bottling Works Company in the same town. Many different bottle types, including wine, beer, and liqueur bottles, form part of this design. The Kaleva Historical Society purchased the house, which is listed on America’s National Historic Register, in 1983, and it now operates as a museum.

Progressive architecture can manifest itself in small or large projects. One particularly startling example of self-sufficient eco-friendly design can be seen in the Zira Island plan. This project, which is intended to turn a small island called Boyuk Zira in Azerbaijan into a carbon-neutral eco-community and resort, began construction in 2010. Solar and wind power feature heavily in the island’s energy setup, while a desalination plant will provide its inhabitants with fresh drinking water.

The Zira Island plan isn’t just progressive from a technological viewpoint: it’s also visually stunning. Its architecture is designed to merge into the topography of the area and essentially become a natural part of the landscape. When it is complete, tourists and residents will be able to access the island via ferry from the nearby coastal city of Baku.

Green construction isn’t just good for the environment: it’s also good for your health. Volatile organic compounds (VOCs) in many traditional construction materials can cause breathing difficulties and have long-term negative health effects. Green construction materials, on the other hand, generally promote health and repurpose existing structures. Leadership in energy and environmental design (LEED) is a US-based certification process for green construction that is designed to recognize this, and which is based on factors like building location, structural design, eco-friendly materials, and energy-saving features.

Real-estate industry insiders believe that eco-friendly buildings are set to become the new normal. According to experts, a greater emphasis on energy efficiency and climate change will boost the value of ecologically sound structures in coming decades. With this in mind, they note that the construction industry in general should focus on green building techniques whenever possible; apparently, construction companies all over the US have already taken this advice to heart.