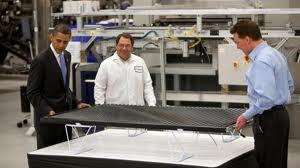 “If you win the N.C.A.A. championships, you come to the White House," exclaimed President Obama. "Well, if you’re a young person and you’ve produced the best experiment or design, the best hardware or software, you ought to be recognized for that achievement, too," added the President. "Scientists and engineers ought to stand side by side with athletes and entertainers as role models, and here at the White House, we’re going to lead by example.”

President Obama has been urging young people to study science and engineering instead of investment banking. Obama's message was clear. He wants young people to pursue careers that actually contribute to making things and making people's lives better. He expressed optimism that more young people would get involved in science and that this would help our economy regain its solid footing.

The collapse of the dot.com bubble, the sluggish economy, and the rise of offshore outsourcing have caused more college students to enroll in science programs--a change from 28,675 to just over 31,000 in one year.

President Obama noted that America can and must have the best-educated, highest-skilled workforce in the world. To build new cars and a new clean-energy grid, America will need to "build" engineers and scientists. Obama added that the U.S. must cultivate more homegrown engineering talent to enhance our ability to compete for the jobs in the 21st century.

For an additional perspective by the President himself, check out this video:

For more information on Engineer jobs, check out: http://www.engineer-jobsite.com/