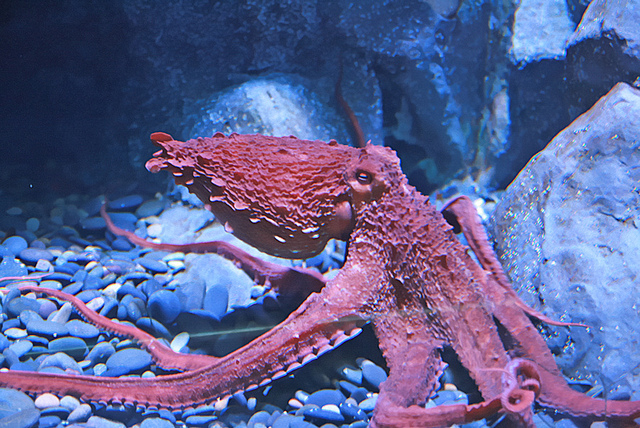 Mechanical octopus tentacles may help surgeons perform operations in the future thanks to new technology developed by Italian doctors. This type of surgical technology potentially can make it easier for surgeons to access hard-to-reach places and reduce the chances of complications.

These robotic octopus tentacles inflate and deflate in order to determine the stiffness of the device. The movements mimic how a biological octopus twists, turns, elongates and moves its body to contort into just about any shape, size and direction. One section of the robotic arm can handle organs while another part actually performs the surgery.

Scientists, engineers and doctors showed this type of system uses two connected modules, each with a flexible central pipe filled with ground coffee. This pipe is surrounded by three cylindrical, air-filled chambers equally spaced along the arm to stand in as octopus tentacles. This entire mechanism was embedded in flexible silicon in order to mimic the body of an octopus.

Researchers inflated different parts of the arms to different levels. By doing so, the arms were able to move in any direction. The entire module can stiffen after air is sucked out and granules fill in the space. Granular jamming, with substances such as coffee or sugar, creates denser space that stiffens the arm.

Although the system does not exactly mimic octopus tentacles in terms of size, speed or dexterity, this surgical technology shows promise. The arms were able to manipulate water-filled balloons that stood in for soft organs such as a gallbladder or spleen. The arm was able to bend up to 255 degrees and stretch up to 62 percent beyond its original length during several experiments. The arm's stiffness increased as much as 200 percent.

Smaller versions of robotic octopus tentacles still may be years away. The system used by the Italian researchers was still relatively crude, and medical-grade materials must replace the materials put into the prototype arm.

However, the ability for one surgical instrument to multitask shows promise. Instead of three surgical instruments placed into an incision at once to lift, cut and view the surgery site, the mechanical arms use just one main arm to carry three instruments through a single incision. The delicate nature of the work requires computer-controlled precision and small tools. The technology must be developed more before becoming mainstream.

Robotic surgeries may not be cost-effective for health care companies and patients at first. Insurance companies may not cover procedures done with newer technologies and experimental surgeries. Some newer systems, such as one made by Titan Medical, may help hospitals save money by reducing a patient's time in the hospital, but the initial system costs $2 million plus $100,000 in annual maintenance costs. This robotic technique uses one incision just 15 millimeters wide to perform delicate surgery.

As with all medical procedures, the new octopus tentacles must become commercially viable before adoption by health care facilities. Doctors must also learn to use the equipment, which makes the rollout of new surgical techniques even more complicated at first.

Photo courtesy of Karen at Flickr.com