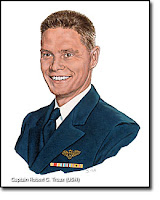 I'm a little behind on this, but Cpt. Robert Collins Truax (USN, Retired), rocket scientist, died on the 17th of September, at the age of 93.

Truax was an advocate of using large, simple, relatively inexpensive rockets to heft satellites and other cargo into orbit, and for the use of steam rockets as a safer alternative to traditional rocket motors. It was a steam rocket that powered the Skycycle X-2 that Evel Knievel rode into the Snake River canyon during a failed attempt to jump it. Truax was also associated with the American Astronautics team that fielded a vessel for the Ansari X-Prize -- the competition to create the first commercially viable, reusable space transit vehicle. But before all of that, Truax advocated to Congress the need for the creation of an independent space agency -- an agency which would later become the National Aeronautics and Space Administration.

Robert Truax was a man who dedicated his life to the pursuit of the unknown; not necessarily pushing the limits of the available technology, but striving to make it more versatile, and more accessible to all manner of applications. Once, when speaking of his X-3 'Volksrocket', he said, "It isn't everybody that can sweep pine needles off their own rocket." Certainly, though, had he his way, there would be a lot more people that could make that claim.


Looking for a job in Engineering? Visit http://www.engineer-jobs.com/


Mike Wrightly is mostly diesel fumes and duct tape; he grew up around heavy equipment, and holds a Bachelor's degree in Mechanical Engineering.