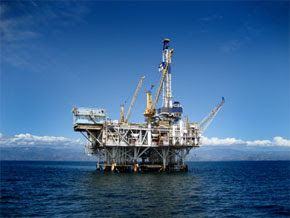 Scientists at Adrok, Edinburgh, Scotland, have developed a technique called Atomic Dielectric Resonance (ADR) to detect and measure onshore oil reservoirs—from the surface of land, water or airborne platforms. Devised as a scanner that uses radio and microwaves to reveal oil deposits at depths of up to 4km, the new scanner reduces the need to drill test wells.

Detecting oil reservoirs from the air means you can survey much larger areas very quickly. In operation, the scanner sends radio and microwaves into the ground, then measures the resonance of electrons in the mineral atoms and the energy change that occurs as the signals are returned by the different layers of rock.

The problem with devices used up till now was that the EM waves were simply soaked up when they hit the ground. The new technology exploits beam resonance and its interaction with the materials in the ground. It creates a series of ‘virtual boreholes’ at different points in the area, then extrapolates the data to determine the size and depth of the deposit.

By some estimates, ADR scanners could reduce the cost of exploratory oil drilling by as much as 70 per cent by curtailing the number of wells needed. The technology recently predicted the presence of an oil reservoir in Oklahoma, which currently produces 22 barrels of oil and over 1,400,000 cubic feet of gas a day.

I once wrote about a technology that used satellites to map the earth's surface for minerals. Their slogan was "The higher you go, the deeper you see."

If you're interested in joining the exciting industry of oil and gas exploration using the latest high tech tools, check out the job openings at Oil and Gas Job Search.